Size750mL Proof117 (58.5% ABV)
Crafted with a mash bill of 75% corn, 21% rye, and 4% barley at the Striped Pig Distillery in Charleston, this 117-proof bourbon has won some of the most prestigious awards in the business. 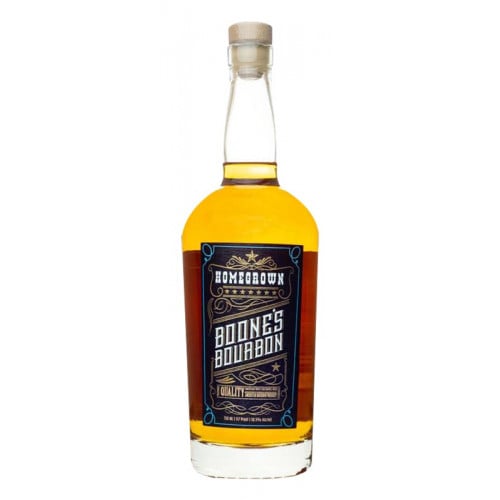 Tyler Boone is a singer, songwriter, and multi-dimensional business entrepreneur from South Carolina. It was in 2015, while living in Nashville, Tennesse, that the idea for a "homegrown" Boone’s Bourbon was born. This spirit is distilled at the Striped Pig Distillery in Charleston, South Carolina ― Boone came upon them once he returned to Charleston and learned about starting a brand.

The brand was finally launched in 2018 with the help of his father, Michael Boone, and has since received several of the most prestigious awards. These include being named "Top 6 in the World Bourbon" by Forbes Magazine, a Double Gold at the New York International Spirits Awards, and a Platinum Medal at the Los Angeles Spirits Awards.

Striped Pig Distillery’s bespoke machinery was designed by distillers and owners, Johnny Pieper, Jim Craig, and Todd Weiss who created state of the art, custom-made copper plate condensers and stainless steel boilers. Boone’s Bourbon is crafted with a mash bill of 75% corn, 21% rye, and 4% barley, then aged in new charred white oak, it is bottled at a high octane 58.5% ABV. It has pleasant aromas of sweet corn, vanilla, and baking spice, followed by a rich caramel-flavored palate, kissed by a touch of smoke.

Entry to the mouth brings a strong flavor of caramel – buttery but somehow not very rich – with a faint note of green apples adding a hint of fruity tartness to the base. That sits for a moment before taking on a bit of a smoky character as a cinnamon flavor begins to build and build until it eclipses anything else.