Size750mL Proof102 (51% ABV)
Only 4 casks of this 18YO molasses-based, column still rum have been produced. Aged for 2 years in Guayana and for additional 16 years in ex-bourbon casks the UK, it was bottled in New York State in 2021.
Notify me when this product is back in stock. 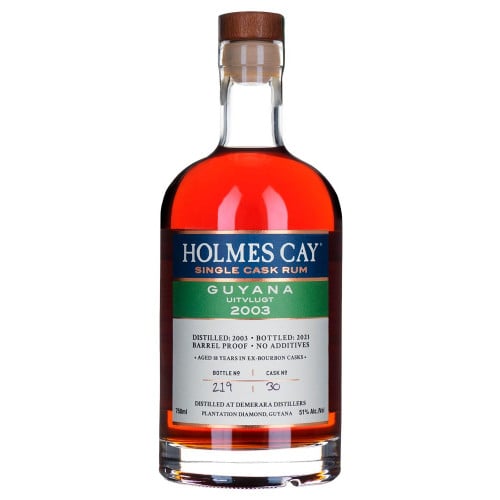 Passionately standing behind the tradition and supporting producers of traditional, unadulterated rums, Holmes Cay age statements are real and their unmistakable taste is created with aging alone without any sugar, color or flavorings. Kaye hopes to bring incredible as-of-yet-unknown rums to the US, introducing spirit-lovers to the best-kept secrets of the rum world. Their very first release ― Holmes Cay Barbados 2005 ― fittingly comes from the legendary Foursquare Distillery in Barbados.

Only four casks of the Holmes Cay Guyana Uitvlugt 2003 edition have been produced. This outstanding example of a premium rum was aged for 2 years in Guyana and for 16 years in ex-bourbon casks the UK before being bottled at barrel proof of 102 proof in New York State in 2021. The name of this molasses-based, column still rum is pronounced Eye-flot and it honors the now-closed Uitvlugt Distillery where the 19th century French Savalle four-column still, used for the distillation of this expression, came from. The unique taste of this premium edition rum is a balanced dance of overripe tropical fruits, almonds, herbs and a touch of cocoa. Like nothing you’ve ever tasted before.

Get your bottle of this limited-edition rum today!

The nose greets you with golden honey and a whiff of brine. The palate leads with overripe tropical fruits and develops into notes of almond, herbs and a touch of cocoa in the background. The finish is lingering light tobacco.