Size750mL Proof122 (61% ABV)
A single blend rum of pot still and column still rums aged for 14 years in ex-bourbon and ex-Madeira casks. Despite being bottled at a whooping 122 proof, it delivers a pleasant finish. A bold, dazzling rum expression.
Notify me when this product is back in stock. 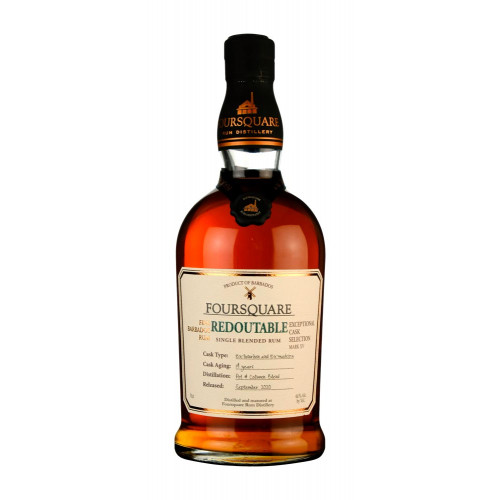 The Seale family behind Foursquare Rums can trace its roots on Barbados back to the 1650s, while their rum-making experience dates back to 1820. The history of Foursquare Rums begins in 1926, when the Seale family began sourcing rum from Barbados distilleries, blending and bottling them. Eventually, they acquired other brands up until the mid-1990s, when Richard Seale, the fifth generation in the family business, worked alongside his father to renovate an abandoned sugar factory – the Foursquare Rum Distillery to be. Today, the Foursquare Rum Distillery’s output rivals that of its neighbor Mount Gay Rum. Situated in St. Philip, Barbados, this modern distillery with state-of-the-art equipment is one of the steadfast supporters of Caribbean rum production. Named Rum Producer of the Year at the 2017 International Spirits Challenge, it offers a wide range of award-winning rum expressions.

Released in 2021 within their Exceptional Cask Selections, Foursquare Redoutable 14 Year Old Rum is a single blend of pot still and column still rums aged for 14 years in ex-bourbon and ex-Madeira casks. Blended by Master Distiller Richard Seale, Foursquare Redoutable is bottled at cask strength of a whooping 122 proof. Expect sweet and fruity notes as well as vanilla from bourbon wood. Despite the high proof, the finish is gentle and long with classic vanilla, coconut and wood flavors. A magnificent example of a single blend rum.

Get your single blend rum today!

The nose is balanced and fruity with aromas of vanilla, coconut and a touch of spice. The palate is sweet and rich with flavors of dark fruits, red wine and some black pepper. There’s a slight smokiness present. The finish is pleasant and long with lingering notes of vanilla and coconut.