Size750mL Proof92 (46% ABV)
Distilled in Fiji, blended in the Netherlands and bottled in New York State. Bottled at 92 proof, this versatile limited edition is a blend of lightly aged pot still and column still rum. Discover new dimensions in the rum galaxy.
Notify me when this product is back in stock. 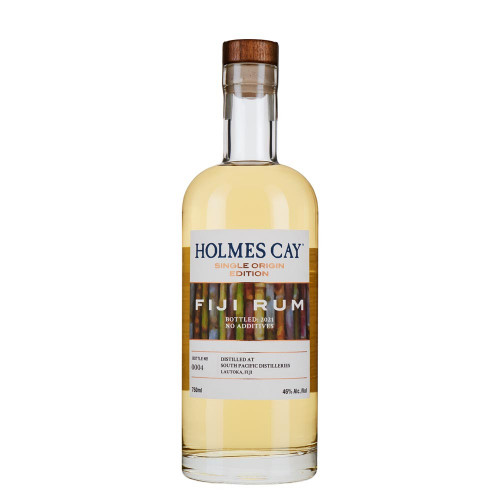 Distilled in Fiji at South Pacific Distillery, Holmes Cay Fiji 2021 Single Origin Edition brings together a lightly aged pot rum and a column still rum that were blended in the Netherlands and bottled at 92 proof in New York State in 2021. Holmes Cay founder Eric Kaye said about the expression: "When we tasted the Fiji rum blend created for the Rumcast podcast recently, we knew that we had to share it with US spirits lovers for its versatility and distinctive, dry flavor. It was a perfect fit for the Single Origin edition series, where we highlight limited quantity rum expressions from a single country." Greeting with grass, citrus, and pepper on the nose, the palate delivers clove and honey notes, rounded by a hint of hay and pepper on the finish.

The nose opens up with grass, citrus, and pepper. The palate delivers clove and honey notes, rounded by a hint of hay and pepper on the finish.