Size750mL Proof80 (40% ABV)
English Harbour Five Year Rum is an impeccably smooth, light bodied Caribbean rum produced by Antigua Distillery Limited. This award-winning rum is distilled in a copper column still from molasses, and aged in oak for a minimum of 5 years before it is bottled at 80 proof. 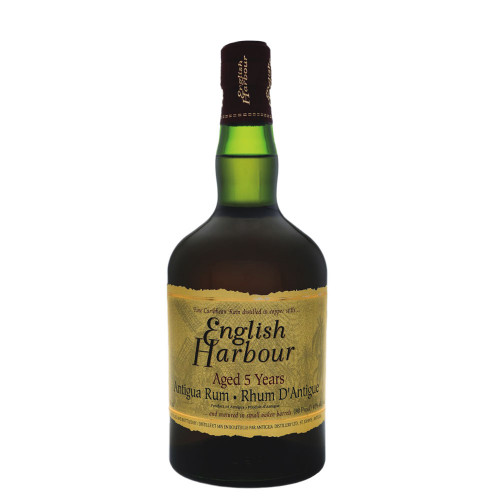 Antigua Distillery Limited was formed in 1932 by a group of eight local entrepreneurs, who a few years earlier came together to buy molasses in bulk and control the distillation process for their rums. In 1933, the company opened a rum distillery on Rat Island in St. John's harbor and the first rum it produced was sold unaged in casks to local rum merchants and aged or matured as Caballero Rum. In 1947 ADL introduced its own label, Cavalier Muscovado Rum, and a lighter version of this rum is still marketed today as Cavalier Antigua Rum. In 1991, the distillery installed a 3-column pure copper still from John Dore & Co., modified on site to simulate 5 columns, which is the only column still in the Caribbean to which other metals have not been added.

All the ADL rums are made in the same way, and the difference between them lies in the length of time the rum is left to build flavor and complexity in the barrel. ADL makes its rum from molasses. After distilling the wash in the copper still, the clear distillate is tested and then placed in oak barrels for maturation. ADL ages its rum in used 200-liter charred American bourbon barrels. A handful of oak chips is added to each barrel to enhance the interaction of oak and rum. The rum is aged from 2 to 10 years, with the occasional cask or batch being held for as long as 25 years. ADL blends its rum in relatively small batches, carefully selecting barrels from the same year. The rum is poured in a large oak blending vat, and gradually diluted to 80 proof, a process that takes 4 to 5 weeks in order to reduce the amount of rum lost by evaporation.

English Harbour Five Year Rum is an impeccably smooth, light bodied Caribbean rum. This award winning rum is aged in oak casks for a minimum of 5 years, before it is carefully blended in batches of 8000 liters. After it passes the last taste test of three experienced rum makers, the rum is bottled at 80 proof.

The nose has notes of cherry and oak and a wisp of smoke. Ripe apple, coconut and hints of cinnamon on the palate are followed by a smoky finish with slightly sweet coconut and spice.