Size750mL Proof86 (43% ABV)
This unique spirit is a blend of 10-year-old African and 8-year-old Caribbean rum, the first of its kind. Complex, rich, and deep, it brings together two worlds, honoring the legacy of freedom fighter and abolitionist Olaudah Equiano. 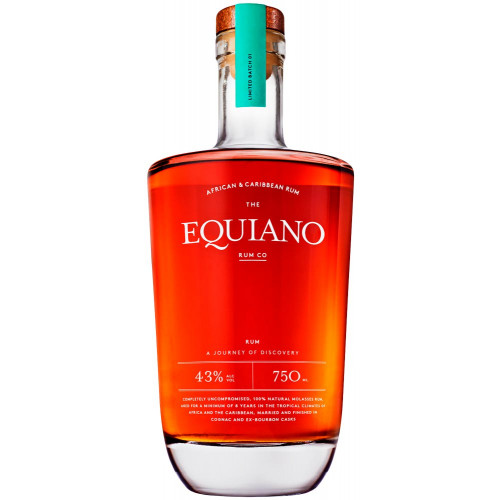 Olaudah Equiano was born in 1745 in Nigeria. Enslaved in his youth, he worked in the Caribbean before ending up in the United Kingdom. There he traded rum, eventually saving up the 40 pounds that he needed to buy his freedom. He would become one of the first African writers to have their work published in the UK and the US and it was his work as a freedom fighter, revolutionary, and abolitionist that would put his mark on history. This rum pays tribute to his legacy and his name.

This rum pays tribute to his legacy by giving 5% of company profits to ground level freedom and equality projects annually.

Equiano Rum is the world's first African and Caribbean rum, one that brings together two worlds, the old and the new. The award-winning spirit was crafted by industry legend master distiller and blender Richard Seale. It's a blend of rum from Gray's Distillery in Mauritius as well as rum from Foursquare Distillery in Barbados. The first is column-distilled and aged in French Limousin oak and ex-cognac casks for a decade. It then gets shipped to Barbados, where it is blended with rum that has spent 8 years in ex-bourbon barrels. Bottled at 86 proof it's 100% natural with no added sugar, spice, flavors, and colorants. The complex, rich, and deep spirit has won a Gold Medal at the San Francisco World Spirits Competition, among several other accolades.

It's a complex, rich, and deep profile that leads with vanilla, toffee, fruit, and oak on the nose. It's fruity on the palate with raisin, banana, and plenty of citrus notes. Oak and spice balance it nicely all the way through the lengthy finish with a pleasant sweetness.