Learn more
Size750mL Proof122 (61% ABV) *Please note that the ABV of this bottle may vary
This complex and intense rum comes from the Travellers Liquors Distillery of Belize. It has been tropically aged for 15 years in ex-bourbon casks and is bottled at cask strength with no sugar, color, or flavors added.
Notify me when this product is back in stock. 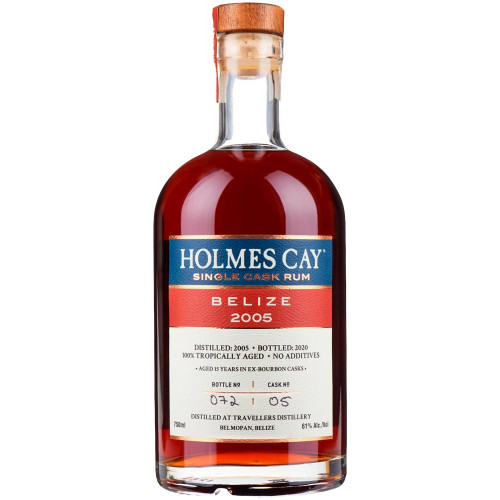 Holmes Cay Belize 2005 follows in the footsteps of their recent releases of Barbados, Fiji, and Guyana rum. Crafted in collaboration with Travellers Liquors Distillery of Belize it's a 100% tropically-aged column-still rum that has spent 15 years in ex-bourbon barrels. Distilled in 2005 and bottled in 2020 at cask strength, this 122-proof rum has no sugar, color, or flavoring added. 4 casks of this rum were produced in total.

It's a complex nose with cherries, vanilla, chocolate, licorice, caramel, as well as spice, oak, and some coffee. The palate has stone fruit notes along with tobacco, earthy undertones, and dried fruit. The finish is medium with fruit, raisins, vanilla, and some spice.