Size750mL Proof92.6 (46.3% ABV)
This unique bourbon whiskey earned 93 points at the Ultimate Beverage Challenge.
Notify me when this product is back in stock. 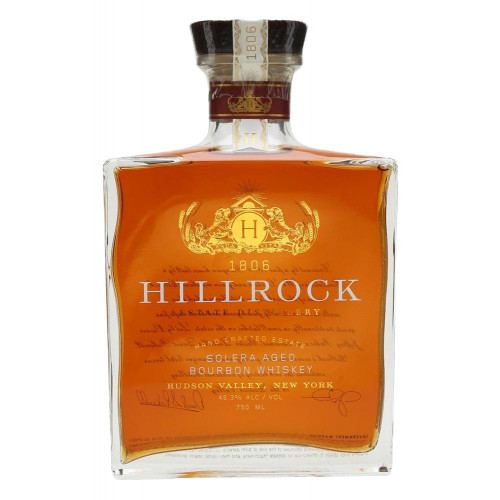 Hillrock Solera Aged Bourbon was the world's first solera aged bourbon. Solera aging is a process that has generally been reserved for aging cognacs, ports and sherries. It involves filling a series of casks at different intervals over a long period of time. As whiskey from the oldest cask is emptied and bottled, the cask is re-filled with an equivalent amount of whiskey from the second-oldest cask in the solera. This cascading effect continues until the youngest cask in the solera is filled with new whiskey. As a result, no cask in the solera is ever fully emptied. In addition, as the younger whiskey ages and cascades through the solera, its average age and complexity gradually increase over time.

This solera-aged Hillrock expression is finished in rare Napa Valley Cabernet wine casks. “The multi-barrel aging of this copper/amber whiskey with slight red hues in appearance before offering a caramel-vanilla nose full of fruit (cherry, blackberry and citrus) and sweet desserts (taffy, caramelized sugar, plum and caramel). Warm and sweet notes of vanilla, toffee and French oak complemented by a bouquet of floral and fruity notes – black cherry, currant, violet and nuts complete the palate before leading to a long and vanilla-focused finish, highlighted with cherry and cabernet flavors” (producer). This unique bourbon whiskey earned 93 points at the Ultimate Beverage Challenge.

Caramel-vanilla nose replete with cherry, blackberry, citrus and sweet taffy, caramelized sugar, plum and caramel. Warm and sweet notes of vanilla, toffee and French oak complimented by a bouquet of floral and fruity notes – black cherry, currant, violet and nuts complete the palate before leading to a long and vanilla-focused finish, highlighted with cherry and cabernet flavors.