Size750mL Proof88 (44% ABV)
Presented in a ceramic decanter, this expression was crafted by Master Whisky Maker Gordon Motion using American and European first-fill sherry seasoned casks with the addition of a few refill casks. Bottled at 88 proof, the whisky's fruitiness and distinct heathery peat get to shine through. 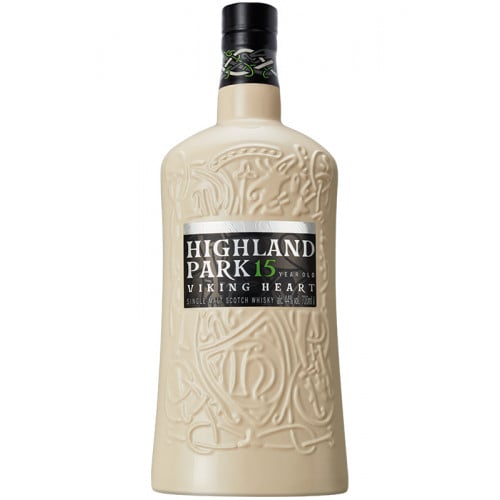 Today, over two centuries after its founding, Highland Park Distillery remains one of the few Scottish distilleries that continues to hand-turn, malt, and peat its own barley. "You have to be careful here on the malting floor," says Eric Tait, Highland Park's Maltman. "You find it a wee bit slippery underneath. I have to turn the malt every eight hours to prevent the roots getting tangled and to get it all aerated properly. The airing also helps it to grow. The malt will be on the floor for seven days, and I'm running five floors at the moment." After malting the barley, Highland Park Distillery smokes it using peat sourced from the nearby peat bog called Hobbister Moor. The unique peat gives Highland Park Whisky its traditional malty flavors that are tempered by just a subtle touch of smoke.

Crafted by Master Whisky Maker Gordon Motion, Highland Park Viking Heart 15 Year Old features a mix of first-fill European sherry seasoned oak casks for their dry spicy notes, and first-fill American sherry seasoned oak casks for their notes of sweet vanilla and crème brûlée. A few refill casks were added into the mix in order to soften the flavors. Bottled at 88 proof, the fruitiness and distinct Orkney heathery peat get to shine through beautifully. The whisky comes in a ceramic decanter that is inspired by vessels that used to hold the whisky a century or two ago.

Get your bottle of this 15-year-old whisky today!