Size750mL Proof96 (48% ABV)
This single malt is crafted in Sweden, taking advantage of the extreme temperature changes during its maturation process. Crafted with both peated and unpeated whisky, it has matured in a combination of ex-bourbon casks from Kentucky, Swedish oak casks, and Hungarian oak casks.
Notify me when this product is back in stock. 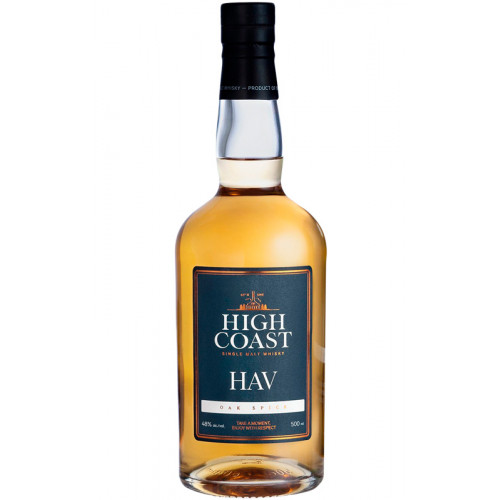 The High Coast Distillery is a secluded Swedish distillery that is located on the bank of the Ångerman river. The site housed a box factory in the 19th century that was transformed into a steam power plant at the turn of the century. In 2010, the former power plant began its transformation into a whisky distillery, changinig the whisky's name from Box Whisky into High Coast in 2018.

Norrland has extreme temperature variations between summer and winter, making for very favorable whisky maturation conditions. Moreover, the Ångerman river provides an endless supply of ice-cold mountain water the distillery uses to cool the process. The highest quality grains, yeast, and water from the nearby Bålsjön spring lake that is known to have clean and super-soft water.

Their inspiration comes from all around the world: their stills are not unlike those you would find on Islay, the mash takes its cues from Japan, the yeast is French... Their warehouses are unheated, meaning that they follow the natural change in weather and temperature, ensuring that the spirit reacts with the barrels. Speaking of barrels, they like to experiment, bringing in the highest quality casks from around the world, ranging from Swedish to Asian oak.

High Coast Hav (Swedish for "sea") takes its inspiration from the river Ångerman and the fact that it merges into the sea very close to the distillery. It's a part of their Origins series that celebrates their heritage. The expression consists of approximately 3/4 unpeated whisky and 1/4 peated whisky. It was matured in a combination of ex-bourbon casks from Kentucky, Swedish oak casks, and Hungarian oak casks. Finally, the whisky was bottled at 96 proof. The distillery is extremely transparent and offers detailed recipes on the website.

Get your bottle of this Swedish whisky today!

The nose is fruity and spicy with aromas of clove, gentle peat, and nutmeg. The palate features a nice balance of fruit and spice, along with hints of peat. The finish is oaky with vanilla and clove.