Caskers Rewards members earn up to 9 store points back when buying this bottle.
Size750mL Proof94 (47% ABV)
An homage to Union General Joseph "Fighting Joe"Hooker, only four barrels of this twenty-one year old bourbon were ever made.
Notify me when this product is back in stock. 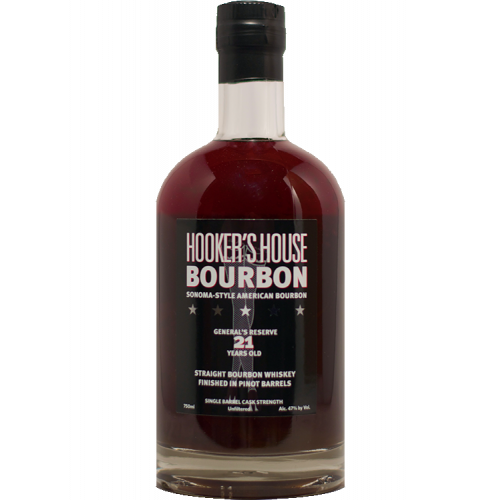 Born in Kentucky, Hooker's House General's Reserve 21 Year Bourbon is a tribute to Joseph "Fighting Joe"Hooker, an infamous Union General during the American Civil War. Although Hooker's actions on the battlefield were often questioned, his love of whiskey and women were not.

Hooker's House General's Reserve 21 Year Bourbon is aged for twenty-one years (technically, the bourbon is legally old enough to drink itself) in new, charred American oak casks in Kentucky. After aging, Fred Groth, master distiller at Prohibition Spirits, double-barrels, or finishes, the bourbon in used French pinot noir barrels. The pinot noir barrels, which are hand-selected based on the previous years vintage, accentuate the bourbon's notes of corn and rye with subtle flavors of dried apricot and cherries. Following this finishing process, the bourbon is brought to proof with natural spring water from the Carneros wine appellation's volcano formation in Sonoma County. Each bottle of Hooker's House General's Reserve 21 Year Bourbon is then filled from a single barrel and labeled by hand.

The bold and spicy character of the bourbon is matched only by General Hooker's indulgent and hedonistic lifestyle. During the war, Hooker kept the morale of his troops high by hosting a group of progressively-minded woman at his army headquarters. The women were affectionately referred to as the Hooker's Brigade, and later, just Hookers. The spirit and legend of the General live on in Hooker's House General's Reserve 21 Year Bourbon, only four casks of which have ever existed. Now you can indulge yourself too.

Hints of violets, apricots, toffee and plum on the nose. Strong notes of rounded, sweet corn are present, while the finishing in pinot noir casks leads to an exceptionally smooth finish, with notes of dried apricot and cherries.