Size750mL Proof80 (40% ABV)
This 80-proof straight bourbon comes from the Heaven Hill Distillery and honors the rich family tradition and pioneering spirit of Henry McKenna, one of the founding fathers of bourbon. 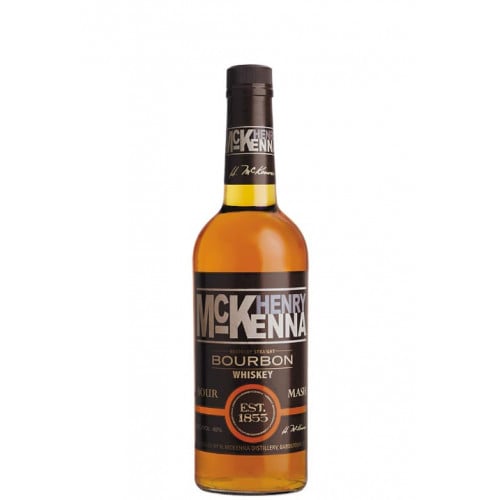 Heaven Hill distillery was founded in 1935, immediately after Prohibition ended in the United States in 1933, after a group of investors, including the famous Joseph L. Beam, decided to be ready for the rebounding market. Heaven Hill is located on a massive estate boasting 22 multi-story rick-houses across hundreds of acres of land. Now known as the "Heaven Hill Bernheim Distillery" they have the second-largest inventory of Bourbon Whiskey in the world. It is also the only remaining large-scale family-owned distillery in Kentucky.

In 1837, Henry McKenna emigrated from Ireland to the United States. After spending nearly two decades as a farmer in Kentucky, McKenna founded an eponymous distillery in 1855. At the time, McKenna focused on the production of wheat whiskey (the only crop he was harvesting at the time) and was able to distill enough whiskey to fill one barrel each day. As word of McKenna's high-quality whiskey spread, McKenna was able to triple his distillation capacity and began experimenting with the production of bourbon. Following his death in 1893, McKenna's three sons — Daniel, Stafford and, James — began operating the business.

The 80-proof Henry Mckenna Bourbon Whiskey honors the rich family tradition and pioneering spirit of Henry McKenna, one of the founding fathers of bourbon. He was among the first to age his whiskey in new, charred American oak barrels. Aged for a minimum of 4 years, it has a mash bill of 75% corn, 13% rye, and 12% barley and is bottled at 80 proof. The oak, vanilla, and butterscotch on the nose are accompanied by floral, citrusy, and cinnamon notes. The mouthfeel is quite creamy and the oak and vanilla are joined by pepper and nutty overtones. There's a well-balanced sweetness with caramel and dried fruit. The finish is medium and slightly warming.

The oak, vanilla, and butterscotch on the nose are accompanied by floral, citrusy, and cinnamon notes. The mouthfeel is quite creamy and the oak and vanilla are joined by pepper and nutty overtones. A well-balanced sweetness with caramel and dried fruit rounds it off. The finish is medium and slightly warming.