Size4260mL Proof0 (0% ABV) *Please note that the ABV of this bottle may vary
This 12-pack contains at least 2 cans of each Bitters & Soda variety: The Dry Aromatic, Spritz Aromatic, Lemon Lime, Grapefruit, and Ginger Turmeric. With little to no calories, the non-alcoholic carbonated drinks are based on their proprietary bitters recipe and can serve as light mixers or aperitifs.
Notify me when this product is back in stock. 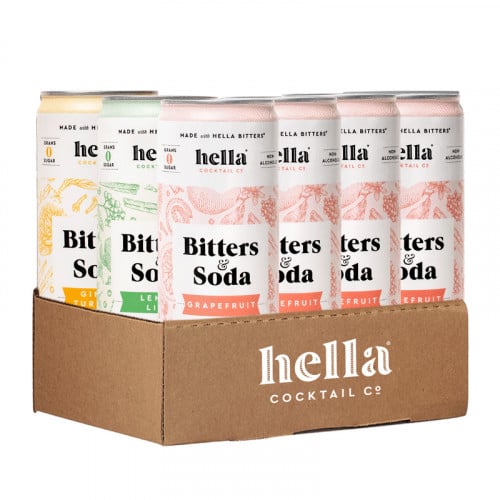 The entire Bitters & Soda lineup of canned drinks has zero sugar (except for the Spritz Aromatic), no alcohol, and has plenty of health benefits, being good for digestion and anti-inflammatory. The aperitifs get their refreshing flavor from a gentian tincture from the south of France. Bitters & Soda Spritz Aromatic and Dry Aromatic were the first pair to be released in the lineup. Both have notes of clove, allspice, bitter root, and orange zest and can serve as a non-alcoholic aperitif or mixer. Lemon Lime, Ginger Turmeric, and Grapefruit were released later. Lemon Lime and Grapefruit feature zesty and citrusy profiles, while the Ginger Turmeric has an equally refreshing profile with a ginger kick and herbal undertones. The 12-pack contains at least 2 of all these 5 variants. Quantities may otherwise vary.

Dry Aromatic & Spritz Aromatic The Dry Aromatic is unsweetened, resulting in a bold profile with notes of clove, allspice, bitter root, and orange zest. You'll find the same notes in the Spritz, except that it's sweeter.

Ginger Turmeric This drink has a bold herbal bite of ginger and turmeric, combined with a pleasant bitterness.

Grapefruit You'll find notes of fresh ripe grapefruit and citrus zest along with allspice and a pleasant bitterness that culminates in a refreshingly bright finish.

Lemon Lime This versatile aperitif or mixer has a bright profile with notes of citrus zest, allspice, and bitter root.