Size750mL Proof94 (47% ABV)
This limited-edition London Dry Gin bears the label of the Los Angeles-based artist Steven Harrington, famed for his bright, exotic and playful art style. A gin that will elevate your cocktails and your home bar.
Notify me when this product is back in stock. 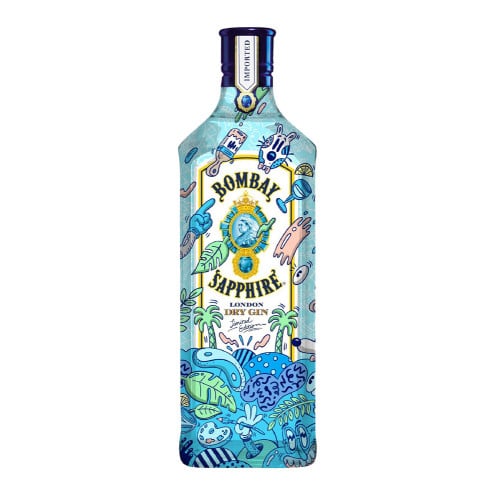 The Los Angeles-based artist and designer Steven Harrington has been described as the leader of "a contemporary Californian psychedelic-pop aesthetic", known for his bright, exotic and playful art style. Creating the label for Bombay Sapphire Steven Harrington Limited Edition, Harrington showcased his signature style, stating "my work is all about connections that transcend time and place". This stunning gin is made with all natural, sustainably sourced botanicals, including Bombay Sapphire core 10 botanicals, hand-selected by their Master of Botanicals, Ivano Tonutti: almond, lemon peel, licorice, juniper berries, orris root, angelica, coriander, cassia, cubeb, and grains of paradise. The perfect gin for cocktails that will stand proudly on your shelf as a piece of art.

Bombay Sapphire's roots go back to 1761 when Thomas Dakin set out to build a gin distillery at a freshly purchased site in Warrington, England. The family kept perfecting the recipe of their Warrington Gin, acquiring a copper still in 1831 and adapting it for vapor infusion, the artisanal process that captures the botanicals, aromas and flavors in vapor ― the same distillation process used by Bombay Sapphire today. After changing hands a couple of times, the distillery along with the recipe was relaunched in 1986, bringing the Warrington Gin recipe into modern times as Bombay Sapphire, a hugely influential brand that played a major role in the spirit's surge of popularity.

The nose opens up with citrus, coriander, piney juniper, and floral aromas. The palate is flavorful and aromatic with juniper, lemon zest, a touch of pepper and earthy notes. The finish brings licorice and a touch of peppery spice.