This product is available in: CA, NE, NH, ND, WA Unfortunately, we can't ship to PO Boxes and APO addresses.

Size750mL Proof90 (45% ABV)
This contemporary gin upgrades the classic London dry botanicals with eucalyptus from Portugal and Valencia orange peel from the US. It has won several prestigious awards, including 2 titles for "Best Gin in America".

This product is available in: CA, NE, NH, ND, WA Unfortunately, we can't ship to PO Boxes and APO addresses. 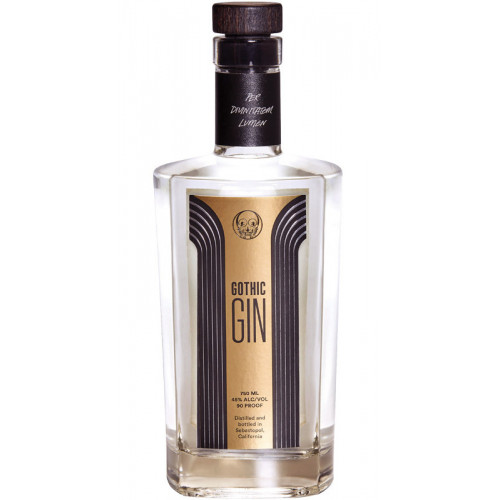 Ever since his childhood, Chris Klug enjoyed traveling and taking in cultural and culinary experiences. This eventually led him to study viticulture, brewing, and distillation. While he wasn't initially a fan of gin, he decided to learn how to make it himself in order to understand why he didn't like it. During a class in Barcelona in 2017, his opinion began to change. Soon after, spurred by health issues, he took a bucket-list trip and ended up taking the same class in Barcelona again. It was there that he perfected the recipe, naming the spirit Gothic Gin after the Gothic Quarters of Barcelona. He found the inspiration for the logo at the Uffizi Gallery in Florence.

While its roots lie in Europe, Gothic Gin is handcrafted in San Francisco from sustainably-sourced ingredients from around the world. Juniper berries from Italy bring pine, peppery, and citrusy notes to the spirit. Coriander seeds and sweet Valencia orange peel come from the US. Moroccan orris root gives the gin its elegant texture and taste, while Indonesian black Lampong peppercorns bring complexity. Eucalyptus leaves come from Portugal, and angelica root comes from Poland, the two combining for fresh, bright, and licorice notes.

Bottled at 90 proof, the contemporary gin has won several prestigious awards that include 2 "Best Gin in America" awards in 2020 ― one from World Gin Awards, the second from The Gin Guide Awards. Bold and flavor-packed, Gothic Gin lends itself particularly well to various cocktails.

Get your bottle of Gothic Gin today!

The nose leads with juniper, pine, orange zest, coriander, and eucalyptus aromas. The palate is gently sweet and earthy with herbal notes. The finish is long and refreshingly citrusy with a touch of pine.