Size750mL Proof90 (45% ABV)
Aged for a minimum of one year, this single-barrel rye is made from 100% white, organic rye grains sourced from North Dakota.
Notify me when this product is back in stock. 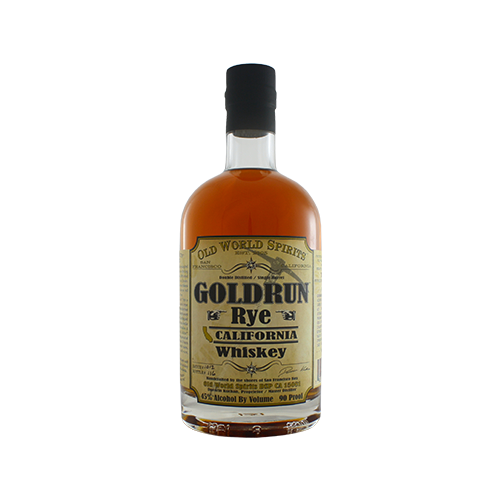 Nearly fifty years ago, on the banks of the Adriatic Sea in the Republic of Croatia, Davorin Kuchan began distilling pear and peach eau de vie using fruit he hand-picked from his own backyard. At the time, Kuchan was just a young boy and his father and grandfather, who were both distillers themselves, taught him the importance of harvesting ripe fruit and using wild yeasts in order to distill amazing craft spirits. After moving to the United States in 1985, Kuchan began formally studying distillation at Michigan State University, and in 2007, opened the doors to Old World Spirits in Belmont, California.

Old World Spirits' Goldrun Single Barrel Rye Whiskey is made from 100% white, organic rye grains that Kuchan sources from North Dakota. After he purchases the grains, Kuchan mills and mashes them at his distillery before fermenting them for approximately 7 to 10 days using a unique strain of yeast made for producing Champagne. "Most distilleries add some barley to their recipes in order to get the yeast to fully ferment the grains," says Kuchan. "Distilling with a recipe of 100% rye is much harder but worth the effort."After the grains have been fermented, they are distilled twice through a 110-gallon, hand-hammered Christian Carl copper still.

Following distillation, the rye is aged for a minimum of one year in new, charred American oak barrels sourced from a cooperage in Minnesota. "We don't age the whiskey for an exact period of time," says Kuchan. "We're trying to recreate the aromas and flavors of an authentic rye — we want you to feel as though you just walked into a bakery and someone is baking fresh rye bread in the back when you try Goldrun."

After aging the whiskey, Kuchan brings it to proof before filling and labeling each single-barrel bottle by hand (each batch of Goldrun Rye Whiskey only produces about 25 cases). Goldrun Rye Whiskey has an aroma of freshly baked rye bread, warm cereal and yeast. The initial notes of doughy bread and biscuits are complemented by hints of honeysuckle and notes of rye. The finish is delicate and lingering with notes of cinnamon, vanilla and a hint of spice.

"We can't produce much Goldrun Rye since its all handmade," says Kuchan. "But what we make is some really great stuff."Try a great rye today!

Aroma of freshly baked bread, cereal and yeast. Initial notes of doughy bread and biscuits, together with hints of honeysuckle and rye. Finish is delicate and lingers with notes of cinnamon, banking spices, vanilla and a hint of honey.