Size750mL Proof80 (40% ABV)
This cognac is aged in Godet's 100-year-old French oak casks that contribute little color to the spirit. What little they do, is then filtered out. The unique expression pays tribute to Jean Jacques Godet's 2008 expedition to Antarctica.
Notify me when this product is back in stock. 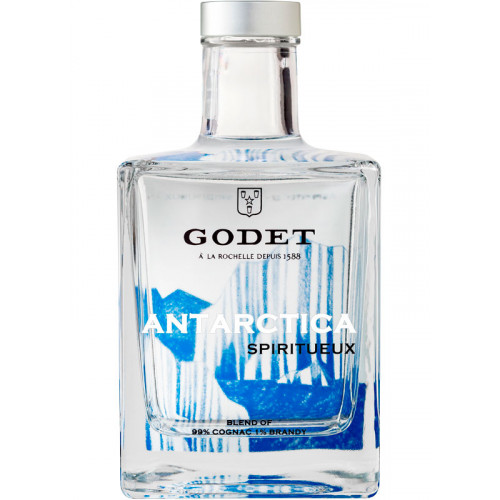 It was way back in 1588 that a Dutch merchant started his salt & wine business in La Rochelle, a harbor town in Western France. His name was Bonaventure Godet and he is counted among the first to start distilling his wine in order to minimize the cost of transportation, receiving the right to do so from Henry IV of France. La Rochelle is where the Arab distillation techniques were first used with locally-produced wine, so it is considered the birthplace of cognac.

First known as "Dutch burnt wine" or "brandjwine", it was the innovative Dutch traders and salt merchants such as Godet that were blazing a trail in cognac production. The business kept growing, so in 1782 Gédéon Louis Godet registered the cognac brand. Today, Godet Freres Cognac is a family-owned operation that is still based in the harbor and is run by the 15th generation of Godets with Jean Edouard Godet serving as Master Blender. Godet Cognac is known for its "floral nose, fruity palate, and a well-balanced length" and the uniqueness that aging the spirit by the Atlantic Ocean brings.

Godet offers a range of expressions ranging from VS to XO with various different collections, such as the Single Cru, Single Grape, and Single Vintage. Godet Antarctica was released as a part of their Moderns series. In 2008, Jean Jacques Godet and his 10 crew members broke a record as the first small yacht to succeed docking in Antarctica, at the 70th parallel south. This expression celebrates that achievement. It is aged in 100-year-old French oak casks that contribute very little color to the spirit due to their age. What little they add, is then filtered out.

Get your bottle of this crystal-clear aged cognac today!

The nose is floral with a touch of caramel sweetness, chamomile, dried apricot, and a hint of juniper. It's sweet on the palate with dried fruit, chamomile, sultana, and orange blossoms. The finish is rich & spicy.