Size750mL Proof80 (40% ABV)
Aged for a minimum of seven years, this brandy earned a score of 96 points at the Ultimate Spirits Challenge in 2014, which named it the Best American Brandy.
Notify me when this product is back in stock. 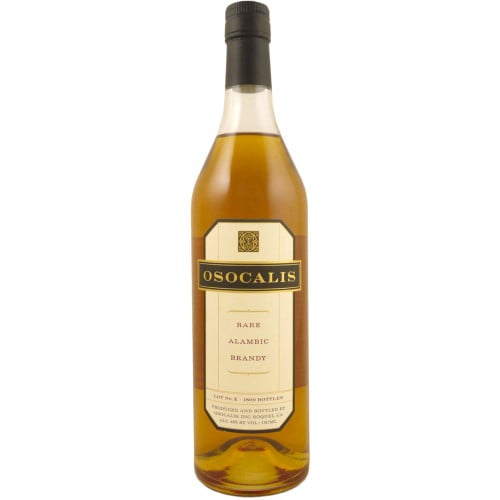 Situated in the Santa Cruz area of California, Osocalis Distillery was founded in early 1990s by two California natives: Dan Farber and Jeffrey Emery. Farber had previously been involved in the production of brandy for over a decade, and studied the art of distilling in Cognac, France, before moving back to the United States. Emery, on the other hand, had been making wines for the Santa Cruz Mountain Vineyard for over a decade prior to founding the distillery. Together, the two founders have over sixty years of experience producing alcohol.

Osocalis Rare Alambic Brandy is crafted from several grape varietals, with an emphasis on Pinot Noir, Semillion and Colombard. Once the California-grown grapes are harvested, they are pressed and fermented into a wine before being distilled through a 100-gallon, antique alambic Charentais still imported from France ("alambic" is an Arabic term that refers to a specific component on a specific kind of still, and is the type of still traditionally used to produce Cognac). "Fire heats steam, and the steam heats the still," says Farber, of the distillation process. "Distilling changes the character of the brandy." After the brandy has been distilled, it is matured in toasted, French oak barrels for a minimum of seven years.

As a result, the brandy has a bold aroma of citrus, stone fruits, lemons and caramel that gives way to notes of spiced apples, caramelized oranges and tang on the palate. The finish is rich and lush, with touches of cinnamon, ripe apples and light nutmeg.

Osocalis Rare Alambic Brandy earned a score of 96 points at the Ultimate Spirits Challenge in 2014, which named it the Best Brandy in the World. In addition, it earned a score of 93 points from Wine Enthusiast, which named it one of the Top 50 Spirits of 2011. "You need time and patience," says Emery, in order to craft excellent brandy. "It's a very expensive, very time consuming process."

Bold aroma of citrus, stone fruits, lemons and caramel. Notes of spiced apples, caramelized oranges and tang on the palate. Finish is rich and lush, with touches of cinnamon, ripe apples and light nutmeg.