Learn more
Size1000mL Proof95.4 (47.7% ABV) *Please note that the ABV of this bottle may vary
Aged for 19 years in ex-Bourbon barrels before spending an additional 15 years of extra-maturation in ex-French Bordeaux Premier Grand Cru claret casks, this incredible whisky is Glenmorangie’s rarest-ever release.
Notify me when this product is back in stock. 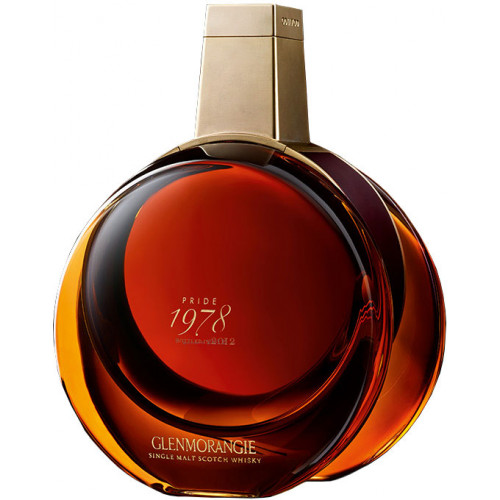 In 1978, Glenmorangie, a world-renowned distillery located in the Highlands region of Scotland, distilled and laid down for maturation a single malt whisky in its finest first-fill bourbon casks. The whisky spent 19 years aging in those previous oak casks before Dr. Bill Lumsden, Glenmorangie’s Master of Whisky Creation, noticed the superb character that had developed, and had a radical idea to further enhance and transform the whisky.

Rather than bottle the whisky shortly thereafter, Lumsden decided to age the whisky in the ex-Bordeaux casks for an incredible 15 years, the longest-ever period a Glenmorangie whisky has undergone additional maturation. "The wine barrels I used for the extra maturation were very rare, very special, and I wanted to try to get the very best out of them — and that’s ended up resulting in Pride 1978," says Lumsden. Bottled in 2012, 34 years after the whisky was first distilled, Glenmorangie Pride 1978 is the rarest expression released by the distillery to date.

Glenmorangie Pride 1978 is encased in a Baccarat Crystal decanter designed by Laurence Brabant and a custom gift case containing specially-commissioned artwork by Idris Khan, who was also born in 1978.

Due to the extremely limited number of casks used in the aging process, only 700 bottles of this whisky have ever been made, and only a handful were allocated to the United States. Pick up this rare treasure today!

Sweet, woody aroma filled with chestnuts and cedar, with additional scents of toffee, fudge and red fruits, particularly cherries. More baked fruits appear on the palate, which is balanced by oak and Eastern spices, including cinnamon, cardamom and cumin. Finish is subtle and everlasting, with creamy vanilla, milk chocolate, café au lait and citrus fruits all coming together.

1.4 out of 5
(1 reviews)
Write a review
Real email address is required to social networks
Sign in
Login with Google
Login with Facebook
Or
We also recommend