Learn more
Size750mL Proof89.4 (44.7% ABV) *Please note that the ABV of this bottle may vary
The Macallan M Single Malt Scotch Whisky was crafted from a marriage of seven unique casks of Macallan, each of which was personally selected by Macallan's Master Whisky Maker. It is bottled in a luxurious handcrafted and individually-numbered crystal decanter. 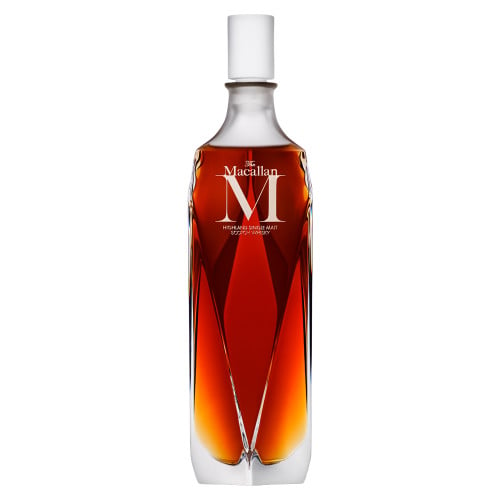 M by The Macallan is the ultimate representation of the master craftsmanship that lies within the heart of The Macallan. The Macallan M is part of the Macallan Masters Decanter Series, where sherry-seasoned oak casks and natural color come together to bring a different level of complexity to each whisky in the range. The Macallan M was masterfully designed by the Creative Director Fabien Baron, and the beautiful crystal decanter was crafted by Lalique.

This luxurious Single Malt Scotch Whisky was made from a marriage of seven unique casks of Macallan, each of which was personally selected by Macallan's Master Whisky Maker after more than two years of searching through the Macallan's vast cellars of over 195,000 barrels. Each cask (the oldest whisky was distilled in 1940) was previously used to mature Oloroso sherry.

As a result, the whisky has a deep rosewood color and the classic complex and intense The Macallan character with aromas of dried fruits, vanilla, orange zest, cinnamon, nutmeg and ginger. Rich, viscous wood spices dominate the palate, and are complemented by undertones of spice, wood and smoke. The finish is gorgeous and lush, with a touch of fresh tobacco. Each decanter is hand crafted and individually numbered decanter unites, joining tradition with striking originality.

Pick up one of these handcrafted, individually-numbered bottles today!

Deep copper color. Aroma of dried fruits, vanilla, orange zest, cinnamon, nutmeg and ginger. Rich, viscous wood spices dominate the palate, and are complemented by undertones of leather, cedar and smoke. Finish is gorgeous and lush, with a touch of fresh tobacco.