Learn more
Size750mL Proof92 (46% ABV) *Please note that the ABV of this bottle may vary
Aged in three unique types of casks, this whisky is the fifth release in Glenmorangie's Private Edition collection.
Notify me when this product is back in stock. 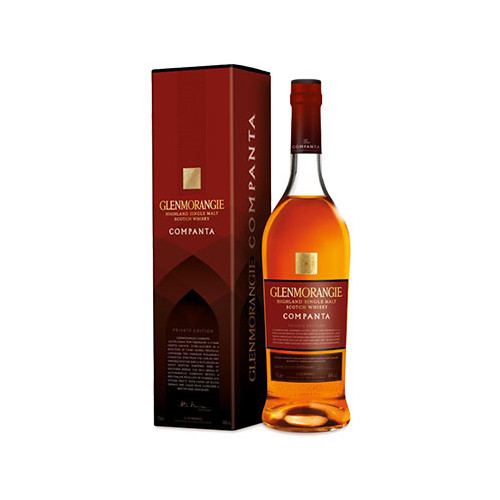 Glenmorangie Companta Single Malt Scotch Whisky is the fifth release in Glenmorangie's Private Edition collection. The previous release, Glenmorangie Ealanta, was named the World Whisky of the Year in 2013 by the Whisky Bible.

Following distillation, Glenmorangie Companta Single Malt Scotch Whisky is matured in American oak casks that were previously used to age bourbon. After its initial beauty rest, the whisky is double-barreled in a combination of casks sourced from the Clos de Tart (60%) and Rasteau (40%) appellations of France. The casks sourced from the Clos de Tart appellation were previously used to mature a red burgundy, and exhibited an extraordinary truffle-like, umami character, says Dr. Bill Lumsden, Glenmorangie's Master of Whisky Creation. "The smaller vineyards of the region don't seem to worry about yields, costs, or timings,"he adds. "They work tirelessly, simply to produce the very best wine. In the same spirit as Glenmorangie, they stop at nothing in the pursuit of perfection."In addition, the Rasteau casks were previously used to age a fortified wine made from Grenache grapes, and as a result, contribute an earthy heartiness to the whisky.

After the whisky had matured in the wine casks, it was bottled at 92 proof without the use of chill-filtration.

Fruity aroma, with notes of chocolate, orange spices and red berries. Hints of tobacco, sherbet, ginger, brown sugar and spiced pears on the palate. Bold, spicy undertone. Finish is sweet and long, with touches of cloves and mushrooms.