Learn more
Size750mL Proof80 (40% ABV) *Please note that the ABV of this bottle may vary
In homage to the intrepid Portuguese voyagers who went on to change our understanding of the new world.
Notify me when this product is back in stock. 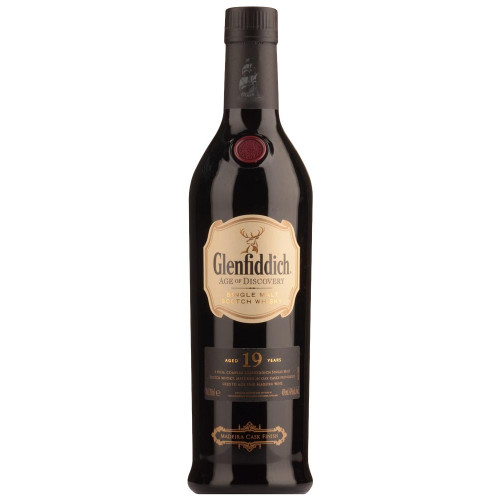 Glenfiddich’s Single Malt Scotch is made exclusively from malted barley, which is milled and mashed with water sourced from Robbie Dhu spring. The crystal clear spring water, which is bottled directly at the source, is incredibly pure — the distillery purchased 1,200 acres around the spring decades ago in order to protect its unique water supply. After the barley has been mashed, it is fermented in wooden fermentation tanks made of Douglas Fir. While wooden fermentation tanks are more expensive and difficult to maintain as compared to stainless steel tanks, they absorb a portion of the heat generated during fermentation, and thus, enable a slower and longer fermentation process. Following fermentation, the wash is twice-distilled through Glenfiddich's copper-pot stills (the distillery employs a craftsman onsite to tend to the stills, which are unique in shape and size) before the heart of the distillate is cut and prepared for maturation.

In homage to the intrepid Portuguese voyagers who went on to change our understanding of the new world, Glenfiddich created their first ever 19 Year Old single malt Scotch whisky.
Glenfiddich Age of Discovery is finished in fine, aged Madeira wine casks from an independent island winery dating back to 1850. An earthy, bright whisky with a warmth that fades to long sweetness the Madeira casks impart an incredible, rich depth.

Earthy aromas of sweet ripe fig and orange marmalade, gooseberry and grapes. The palate is smooth with cinnamon, black pepper, caramelized fruits, ginger, raisins and hints of dry oak. The finish is dry with warmth that fades into sweet marmalade notes.