Size750mL Proof86 (43% ABV)
This Glen Scotia Campbelltown bottling first dripped from the stills in 1992, before being bottled in 2014 by Gordon & Macphail.
Notify me when this product is back in stock. 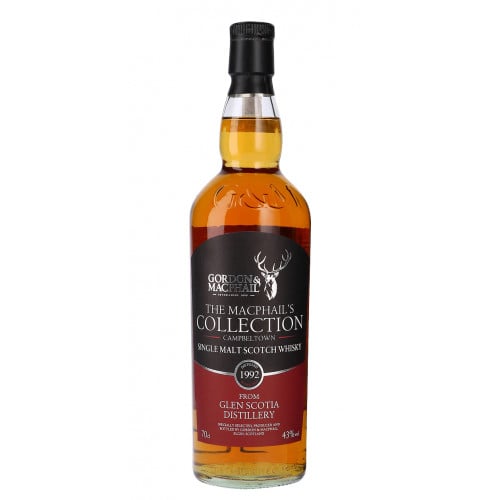 Situated in the heart of Campbeltown, Glen Scotia is one of the smallest distilleries in Scotland. The Scotch distillery was founded by the Galbraith family in 1832. In 2014 the petite facility was purchased by the Loch Lomond Group. The distillery is quite small scale, outfitted with two 12,000 and 16,000-liter stills, with distinctive onion shapes and horizontal lyne arms.

Glen Scotia’s line-up showcases their versatility, as they produced a range of peated and non-peated whiskies, two styles characteristic of Campbelltown. Their malt is sourced from eastern Scotland, and are crafted in open-topped, cast iron mash tuns, and their whiskies are processed with a variation in fermentation time yielding either nuttier, or fruitier malts. Their small-batch distillation process still maintains much of the original equipment designs dating back to the 1830s.

This 1992 Campbeltown single malt vintage is a Gordon and Macphail bottling, released as a part of the MacPhail's Collection. Aged for over two decades and bottled in 2014, this incredible single malt has signature Glen Scotia characteristics of fresh fruit and grassy notes.

The nose is sweet and fruity with baked goods and a subtle maritime character. The palate is sweet with subtle smoke and grassy notes. The finish is lingering with warming spice and a touch of smoke.