Caskers Rewards members earn up to 10 store points back when buying this bottle.
Size750mL Proof92 (46% ABV)
This unique 22 year first dripped from the stills in 1994, getting its beauty rest in first-fill hogshead barrels before being bottled in 2017.
Notify me when this product is back in stock.

Caskers Rewards Caskers Rewards members earn up to 10 store points back when buying this bottle. Learn more
Out of stock
Skip to the end of the images gallery 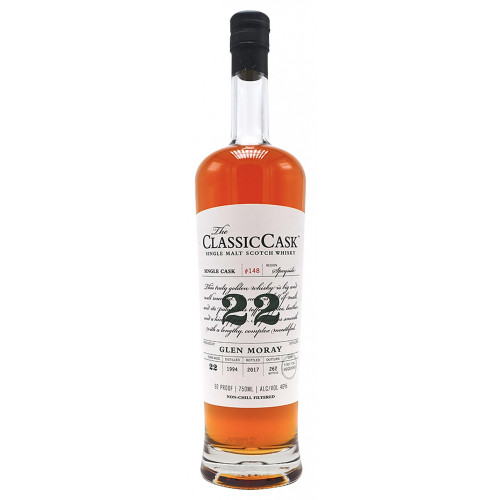 Glen Moray whiskies are signature single malts with every bit of Speyside character: soft and fruit-laden. “The Classic Cask” label releases some of the rarest spirits offered. Each bottle is numbered, with a label indicating the total production output, as well as distillation and bottling dates. This unique 22 year first dripped from the stills in 1994, and was aged in first-fill hogshead barrels before being bottled in 2017.

Peaty aromas on the nose with herbal, earthy notes, and tobacco. The palate is hearty with notes smoke, pepper and apple. The finish is lingering and dry with a solid dose of smoke.