Size750mL Proof86 (43% ABV)
What a birthday card. It's locked safely away in a wooden cask to protect the rare dram inside. This Glen Garioch single malt is unique, abundantly sought-after, and luxurious.
Notify me when this product is back in stock. 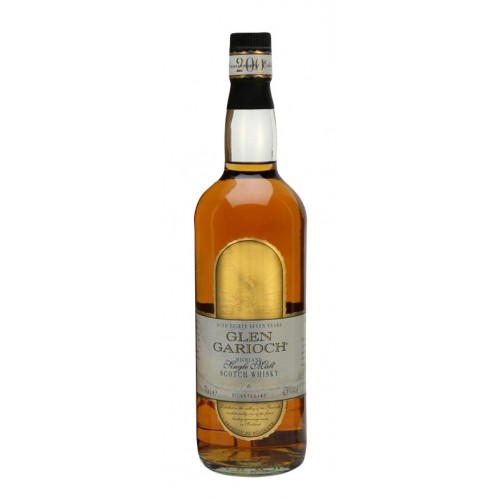 200 years of mastery to celebrate. Situated in the village of Old Meldrum in the Scottish Highlands, the Glen Garioch Distillery (pronounced Glen Geery) was founded in 1797 by John and Alexander Manson. The distillery is one of the oldest in Scotland, and takes its name from the Valley of the Garioch, which is situated adjacent to the distillery and is known for producing the finest barley in all of Scotland. The distillery — the most easterly in Scotland — enjoys the temperate climate and cool breeze that are ideal for the production and maturation of whisky.

Glen Garioch Single Malt Scotch Whisky is made from barley harvested from the Valley of the Garioch. After the barley has been harvested, it is mashed and fermented with water drawn from the Silent Spring. In 1968, production of whisky at Glen Garioch Distillery was suspended as the area surrounding the distillery experienced a severe drought. Four years later, an incredibly pure spring was discovered upon a neighborhooding farm. The Silent Spring, as it came to be known, could neither be seen nor heard without modern instruments, and has been Glen Garioch's water source for over four decades. Once the barley has been fermented, it is distilled twice — first through Glen Garioch copper-pot wash still and then again through its spirit still.

This gorgeous golden dram was released in honor of the 200 year anniversary of the distillery. That happened on the same day that the reopening did. Only 200 fit-for-celebration bottles were ever made. It’s rare and highly in-demand.

You’ll do your collection a huge favor by grabbing this one for yourself!

It starts off heavy on the nose but is balanced with exotic fruit and honey. There are apparent coal elements that hit the palate, and the finish is satisfyingly smokey as well.