Size750mL Proof80 (40% ABV)
After its initial maturation, this Canadian single malt expression was finished for 4 months in oak barrels that used to hold Ortega Ice Wine from the award-winning Jost Vineyards. 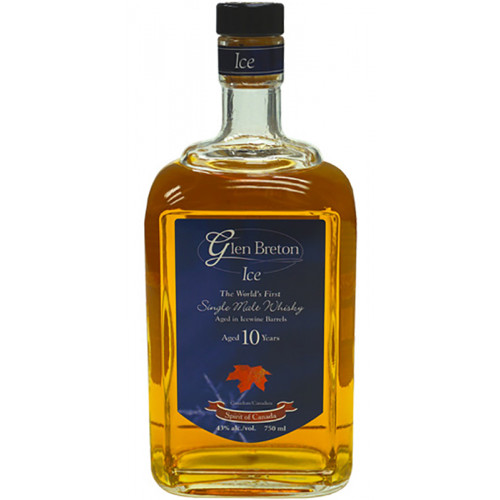 For starters, their whisky harnesses the pure water that flows from the Mabou Highlands, where it flows over granite, marble, and maple and apple tree roots. First, the harvested barley is brought into the distillery, soaked, and allowed to germinate. Next, it is transferred into a kiln building, where smoke and heat halt the germination process, making it ready to be ground and soaked in hot water that dissolves the sugar. Yeast is added to the cooled wort, bringing the alcohol content to 43% ABV. Finally, the liquid is distilled twice using copper pot stills. The new make spirit is then aged in oak casks in the warehouse, surrounded by apple and maple trees for at least 3 years.

Jost Vineyards is an award-winning Nova Scotia winery. A Glen Breton fan suggested that the distillery take a look at their oak casks, prompting Glenora to forge a partnership with the winery. Glen Breton Ice 10 Year Old Single Malt Whiskey was finished for 4 months in oak barrels that used to hold Ortega Ice Wine, imparting the spirit with a distinct fruity sweetness. The expression has garnered several prestigious awards.

Get your bottle of this unique Canadian single malt today!

Honey, apple, vanilla, and baking spice lead the charge on the nose of this pleasantly fruity whisky. You'll find grape, apple, vanilla, nuts, and spice on the palate. The finish is long with dark fruit, ginger, cedar, and hints of wine.