Learn more
Size750mL Proof93.4 (46.7% ABV) - May vary *Please note that the ABV of this bottle may vary
A single barrel offering from George Dickel Tennessee Whisky. Matured for at least 15 years in new American oak, the wood leaves its unique mark and no two bottles are the same. 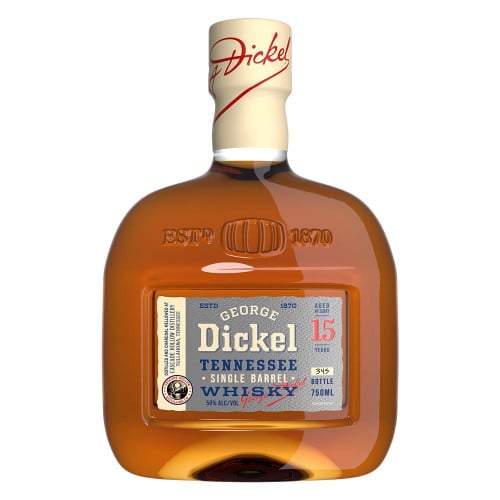 The story of George Dickel Tennessee Whisky dates back to the 19th century when George A. Dickel, a merchant from Nashville, became famous for selling the smoothest and most mellow spirits in the area. He founded Geo. A. Dickel & Co. and bought a share in the Cascade Hollow Distillery in 1878 in the neighboring Coffee County. Inspired by the Scottish tradition, he made whisky without an "e", preferably in the winter months as opposed to the summer – he felt this way the whisky was smoother, so he named it "Mellow as Moonlight". To this day, George Dickel Whisky is chilled before being charcoal mellow filtered, which is known as the Lincoln County Process. This is the only Tennessee distillery to take this extra step to smooth out the flavor. Today, George Dickel Whisky is carrying on this rich tradition at a new distillery building that opened just down the road from the original Cascade Hollow Distillery in 1958.

With a mash bill of 84% corn, 8% rye and 8% malted barley, George Dickel Tennessee Single Barrel 15 Year Old spent at least 15 years in new, charred American oak. A single barrel offering, each barrel left its own unique mark on this spirit and no two bottles are exactly the same. Distilled and charcoal mellowed at the Cascade Hollow Distillery, it’s bottled by hand with little water added. Since this is a single barrel release, the proof can vary from bottle to bottle from 80 to 104.6 proof and so can the taste profile. You can expect notes of vanilla and toffee as well as rich leather, saddle oil and wood, but also more delicate aromas of fruit and notes of lavender. Due to many years spent in new American oak, the hue is beautiful dark, rich leather brown. Try it in a Tennessee Old Fashioned or in a classic on the rocks.

A dark brown hue of rich leather. The taste profile varies a bit from bottle to bottle, but the nose offers delicate tones of fruit and lavender. The palate features notes of vanilla, toffee, rich leather, saddle oil and wood. The finish is warm and pleasant.