Size750mL Proof86 (43% ABV)
This Tennessee whisky is crafted from 10 barrels, all aged 10-12 years and personally selected by Master Distiller John Lunn.
Notify me when this product is back in stock. 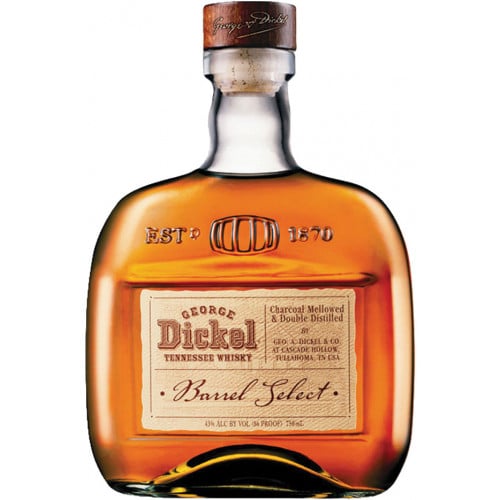 George Dickel Barrel Select Tennessee Whisky is crafted from a mash of 84% corn, 8% rye and 8% malted barley, which is then fermented and double-distilled, first through a column still and later a copper pot still. Following distillation, the whisky is distilled and matured for 10-12 years in barrels that have been charred with a #2 char on the heads and a #4 char on the staves (the degree of charring within a barrel is measured on a scale of one to four, with a #1 char referring to casks that have been lightly toasted, and a #4 char referring to casks that have been charred so heavily that the interior resembles an alligator hide). Once the whisky has matured, Master Distiller John Lunn then personally selects 10 barrels to chill and mellow through sugar maple charcoal, which results in a single, very small batch of handcrafted Tennessee whisky.

George Dickel Barrel Select Tennessee Whisky has an aroma of oak, candied nuts and vanilla, all underpinned by a light wood smoke. The palate is filled with caramel, toasted marshmallows, cloves, faint citrus and even mint, and leads to a long, complex finish containing more oak, corn and cinnamon.

The whisky has earned multiple gold medals from the Beverage Testing Institute, and received a score of 93 points at the 2013 Ultimate Spirits Challenge, where it was rated the #2 Tennessee whiskey.

Aroma of oak, candied nuts and vanilla, all underpinned by a light wood smoke. Palate is filled with caramel, toasted marshmallows, cloves, faint citrus and even mint, and leads to a long, complex finish containing more oak, corn and cinnamon.