Learn more
Size750mL Proof103 (51.5 ABV) *Please note that the ABV of this bottle may vary
George Dickel omits the "e" in this whisky due to the second distillation using a Scottish-style pot still. This single-barrel expression spent 9 years in charred oak before being charcoal mellowed and bottled at around 103 proof.
Notify me when this product is back in stock. 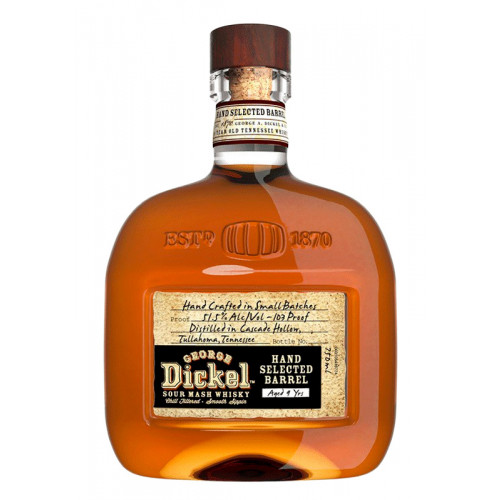 George Dickel 9 Year Old Hand Selected Barrel (Caskers Staff Pick) has them carefully select single barrels of their handcrafted Tennessee whisky. Crafted with a mash bill of 84% corn, 8% rye, and 8% malted barley, the whisky omits its "e" due to the second distillation which uses a Scottish-style pot still. It has spent 9 years in a #4 char oak barrel with a #2 char head before being filtered using the Lincoln County Process. This expression was bottled at 103 proof.

Grab your bottle of this unique Tennessee whisky today!

You can expect rich notes ranging from dried fruit, dates, and raisins, to toast, deep vanilla, toffee, charred oak, and corn. The finish is warm with black pepper, fruit, oak, and a pleasant sweetness.