Size750mL Proof90 (45% ABV)
This farm-to-table whiskey is crafted in Minnesota with a proprietary mash bill that contains 90% corn. Bottled at 90 proof, this pre-Prohibition style bourbon pays tribute to George Benz, a German immigrant who built a substantial liquor business in the US. 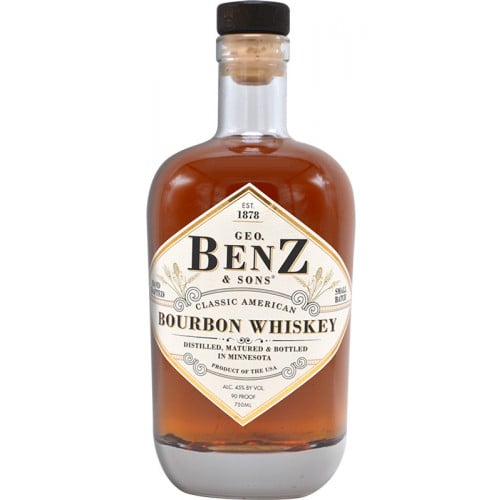 George Benz was a German immigrant who came to the United States in 1853 at just 15 years of age. In the following years, Benz became a liquor wholesaler, eventually expanding his business into distilling. With a steady supply of quality whiskey for his blending and bottling business, the operation grew to include distilleries in 4 different states. The business thrived under his five sons until Prohibition forced them to sell.

Benz's business managed to become one of the largest spirits operations in the US, despite George crossing the Atlantic with little more than the clothes on his back ― a shining example of the American Dream. Geo. Benz & Sons celebrates the man and his work with whiskey that is distilled, matured, and bottled in Minnesota ― his home state.

Geo. Benz & Sons Classic American Bourbon Whiskey is a farm-to-table whiskey that is produced locally in Minnesota with a proprietary mash bill that contains 90% corn. Bottled at 90 proof, this pre-Prohibition style bourbon is smooth and oaky with notes of vanilla, honey, and spice.

Get your bottle of this small-batch bourbon today!

The nose opens with oak, vanilla, honey, and dark fruit aromas with hints of spice. The palate is pleasantly sweet with notes of vanilla, oak, ginger, and baking spices. The finish is toasty and long with a touch of vanilla.