Size750mL Proof135 (67.5% ABV)
Previously named “Micro Whisky of the Year” in Jim Murray’s 2017 Whisky Bible, this new release is the oldest bourbon ever produced in Texas.
Notify me when this product is back in stock. 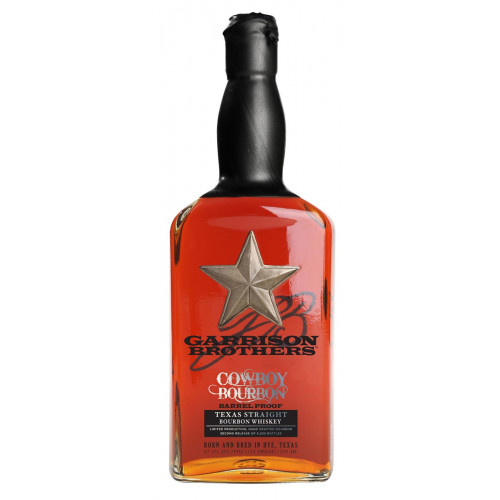 In 2013, Dan Garrison unveiled a secret stock of barrels which he’d been hiding away at the distillery for several years. According to Dan, these were the ten best barrels he’d ever tasted at Garrison Brothers Distillery, and he decided to bottle them together as a special release: Garrison Brothers Cowboy Bourbon. The bourbon — which was uncut and unfiltered, coming in at an astounding 136 proof — was limited to only 600 bottles, and immediately won myriad accolades including Jim Murray’s “Micro Whisky of the Year”. Now, for the first time since 2013, Garrison Brothers Distillery is releasing another Garrison Brothers Cowboy Bourbon, aged twice as long and this time with just 3,750 bottles available nationwide.

The oldest bourbon ever produced in Texas, Garrison Brothers Cowboy Bourbon Barrel Proof Texas Straight Bourbon Whiskey has a bright mahogany color and aroma of burnt sugar, caramel and baking spices. The palate is filled with warm notes of peach cobbler, vanilla extract and roasted nuts, and leads to a smooth finish accented by pipe tobacco, cornbread and melted butter.

Quantities are extremely limited — make sure to pick up a bottle today!

Bright mahogany color and aroma of burnt sugar, caramel and baking spices. The palate is filled with warm notes of peach cobbler, vanilla extract and roasted nuts, and leads to a smooth finish accented by pipe tobacco, cornbread and melted butter.