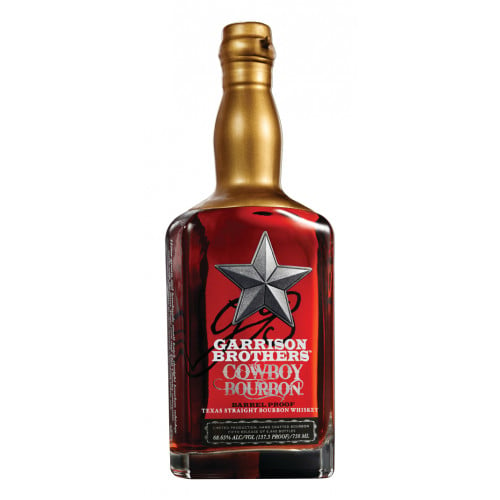 Garrison Brothers Texas Straight Bourbon Whiskey is made from organic corn, wheat and barley. "We get about 30,000 pounds of corn, wheat and barley delivered a month," says Garrison. "The wheat comes from our own fields — we have 65 acres of wheat on the other side of the property."In addition, the corn is harvested from local fields in Texas while the barley is sourced from the Pacific Northwest.

This 2019 Garrison Brothers Cowboy Bourbon clocks in at a high-octane 137.7 proof. It is drawn from the distillery team’s favorite barrels, which were set aside for a couple of years for further maturation. The liquid is bottled at cask-strength, uncut and unfiltered. Each barrel used in this 2019 release was aged up to five years.

“It takes a special barrel to create a bourbon nectar sweet enough to be enjoyed at such a high proof, the potency normally overpowers the flavor. That ain’t the case with the Cowboy – it’s so sweet, the flavor overpowers its proof. And you can thank the Texas heat for that” (Garrison Brothers Distillery).

A bouquet of lavender, Manhattan street-cart roasted walnuts, pipe tobacco, and Arabica coffee. Powerful rush of raw honeycomb, dried cherries, toffee, warm molasses, cooked apricots, and burnt raisins. Figs and ganache. Burnt marshmallows and a Milk Dud finish. A pleasing hiss like a snake’s rattle as it settles in and numbs the tongue.