Size750mL Proof102.4 (51.2% ABV)
House Tyrell of Highgarden rules over the Reach, the lush region of Westeros. Like the Reach, Clynelish is positioned among green pastures and rolling hills, with scenic views of the North Sea.
Notify me when this product is back in stock. 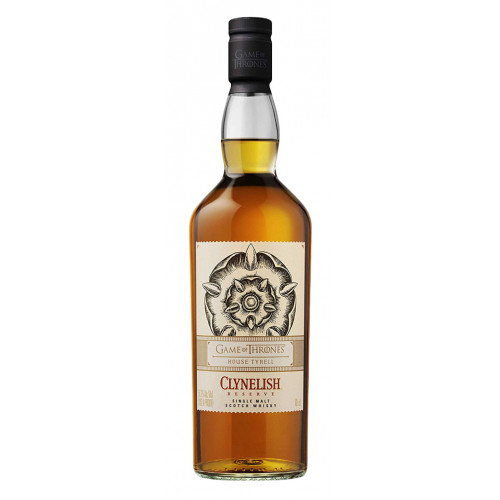 Today — nearly two centuries after its initial founding — Clynelish Distillery continues to use many of the same ingredients, including Highlands-malted barley and water sourced from Clynemilton Burn, in crafting its single malt whisky as it did under the stewardship of the Duke of Sutherland.

House Tyrell of Highgarden rules over the Reach, the lush region of Westeros. Like the Reach, Clynelish is positioned among green pastures and rolling hills, with scenic views of the North Sea. This vibrant, golden Scotch is light and floral, like House Tyrell, it’s not to be underestimated with its underlying complex combination of Highland and maritime qualities.

Bursting with fresh tropical fruits like papaya and mango that subsides into a creamy vanilla character. The finish is slightly maritime in quality with a delicate floral note.

Bursting with fresh tropical fruits like papaya and mango that subsides into a creamy vanilla character. The finish is slightly maritime in quality with a delicate floral note.