Be the first to review this product
Crafted from blend of ten unique recipes, this bourbon earned a score of 94 points from Wine Enthusiast.
$25.99
Add to Wish List

Nestled in the quiet Kentucky countryside near Lawrenceburg, Four Roses Distillery is a testament to American ingenuity and perseverance. Built in 1910 to resemble the architecture of California wineries, the distillery — now listed on the National Register of Historic Places — was one of six distilleries that was granted permission to operate during Prohibition in order to produce medicinal bourbon.

Following Prohibition, Four Roses Kentucky Straight Bourbon became the top-selling bourbon in the United States. In 1943, Seagram's bought the distillery and a decade later, discontinued the sale of Four Roses bourbon. In 2002, the distillery changed hands again, and the new owner brought a renewed sense of purpose and vigor to Four Roses.

Four Roses Yellow Label Kentucky Straight Bourbon Whiskey is made from a blend of ten different Kentucky straight bourbons, each of which is distilled and aged at the Four Roses Distillery. While five of the bourbons are made from a mashbill of 75% corn, 20% rye and 5% malted barley, the other five bourbons are made from a mashbill of 60% corn, 35% rye and 5% malted barley. In addition, the distillery utilizes five different proprietary yeast cultures. "Most distilleries use one mashbill on a regular basis and one proprietary yeast culture," says Jim Rutledge, the master distiller at Four Roses Distillery. "Four Roses uses five yeast cultures in conjunction with the two mashbills. Hence, we have ten unique bourbon recipes." The yeast cultures, which were developed specifically for Four Roses Distillery, allow Rutledge to vary the flavor and mouthfeel of the bourbon "Basic flavor characteristics generated by the yeasts include a light and delicate fruitiness, spicy characters, robust fruitiness, herbal essence and floral essence with a hint of fruitiness," says Rutledge.

Once each of the bourbons has been distilled, the bourbons are matured individually in new, American oak casks, which are allowed to rest in a single-story warehouse just south of Louisville. While most distilleries age bourbon in warehouses that are many stories high, Four Roses' single story warehouse minimizes temperature variations and provides for a more consistent aging process. Following maturation, the ten bourbons are blended together and brought to proof before being bottled by hand.

Four Roses Yellow Label Bourbon Whiskey has an aroma of honey and poached pears that gives way to notes of crisp, fresh fruits and apples on the palate. The finish, which is soft and smooth, earned the bourbon a score of 91 points at the Ultimate Beverage Challenge. In addition, the bourbon earned the Gold Medal at the San Francisco World Spirits Competition in 2013 and 2014, and earned a score of 94 points from Wine Enthusiast.

Aroma of honey and poached pears that gives way to notes of crisp, fresh fruits and apples on the palate. Finish is soft and smooth. 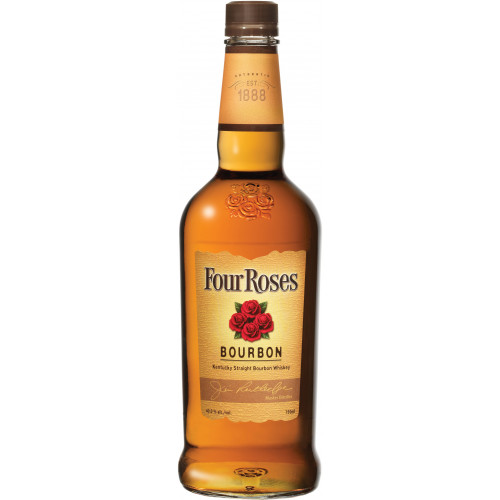