Learn more
Size750mL Proof112.6 (56.3% ABV) *Please note that the ABV of this bottle may vary
In honor of National Bourbon Month, this 2019 Limited Edition is the first Four Roses limited-quantity bottling to feature a 21-year-old Bourbon.
Notify me when this product is back in stock. 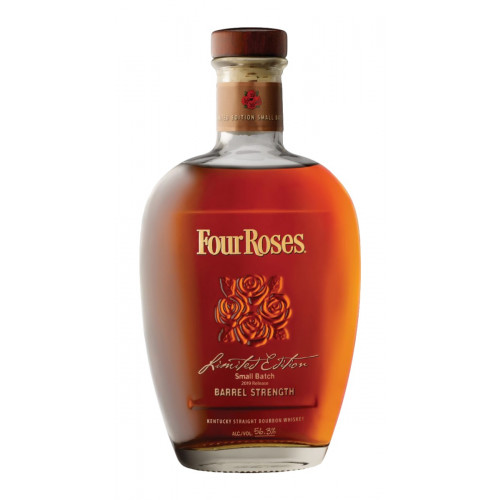 On the banks of the Salt River, nestled in the quiet Kentucky countryside near Lawrenceburg, Four Roses Distillery is a testament to American ingenuity and perseverance. Built in 1910 to resemble the architecture of California wineries, the distillery — now listed on the National Register of Historic Places — was one of six distilleries granted permission to operate during Prohibition.

A signature trait of Four Roses is their use of full transparency; they display the different distillates and recipes that go into each bottle. This showcases how the limited edition blends have evolved year after year. Historically The Four Roses Distillery has been known to use five different yeast strains and two mash bills at any given time. This means that a total of 10 different distillates that can be used to blend their bourbons. Every barrel at Four Roses is labeled with a four-letter code. Each yeast strain and mash bill is identified by corresponding letters K, O, Q, F, V (for the mash bills) and E and O (for the yeast strains).

Four Roses releases a special edition, small-batch bourbon every September, in honor of National Bourbon Month. As a non-core range limited edition, once this bourbon is gone, it’s gone forever. Non-chill filtered and bottled at a 112.6 proof, this 2019 Limited Edition is the first Four Roses limited-quantity bottling to feature a 21-year-old Bourbon which is from the distillery’s OBSV recipe. This expression also showcases a 15-year-old OESK, 15-year-old OESV and 11-year-old OESV.