Learn more
Size750mL Proof108 (54% ABV) - May vary *Please note that the ABV of this bottle may vary
Bottled at cask strength of 108 proof, this small batch Kentucky bourbon blend brings together only the best of barrels, aged between 12-15 years. Wonderfully fruity palate with zero bitterness and a smooth, pleasant finish.
Notify me when this product is back in stock. 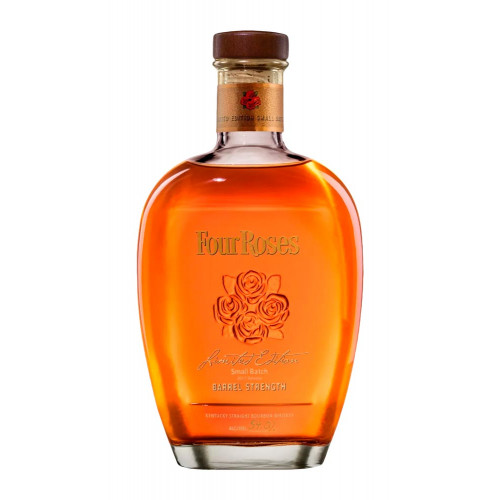 Approximately 13,800 hand-numbered bottles of Four Roses Small Batch 2017 Bourbon Whiskey were released in 2017. Upon the release, Master Distiller Brent Elliot explained "the magic happened early on with this Small Batch Bourbon — after only my third test blend, I knew we had hit the target and then some. Once we combined them, it resulted in more depth, richness and warmth than any one of the individual recipes." A small batch Kentucky bourbon, this dram brings together only the best of barrels. Bottled at cask strength of 108 proof and barrel aged between 12-15 years, expect intensely fruity flavors and sweet vanilla flavors, but they never become too much. If opened up with a few drops of water, the palate develops further and delivers notes of butterscotch, oak and banana.

Deep copper hue. Sweet aromas of stone fruit, spearmint and oak on the nose. The palate is intensely fruity, light and silky with zero bitterness. Notes of butterscotch, oak and vanilla in the background. The finish is smooth and long.