Caskers Rewards members earn up to 11 store points back when buying this bottle.
Size750mL Proof126.4 (63.2% ABV)
Four Gate Whiskey Company’s Release #6, The Kelvin Collaboration II, is a 12-year-old Kentucky straight bourbon finished in cognac and dark rum casks. This sweet and smoky expression from the innovative Louisville-based company was named Barrel-Finished Whiskey of the Year 2020 by Fred Minnick.
Notify me when this product is back in stock. 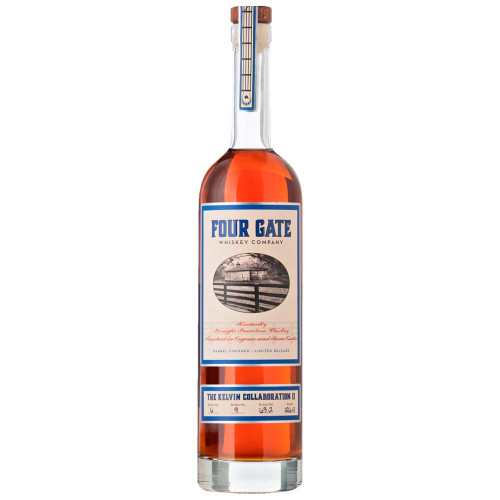 Four Gate Whiskey Company’s Release #6, The Kelvin Collaboration II, is a 12-year-old Kentucky straight bourbon finished in cognac and rum casks. This expression is a follow-up on their very first release of a barrel finished whiskey, The Kelvin Collaboration from April 2019, which was extremely well received. Kelvin Cooperage acquired dark rum barrels from the same rum distillery as the barrels used to finish batch 1. The underlying bourbon is made from a mash bill of 74% corn, 18% rye and 8% malted barley. Adding a new twist, Straub and D’Antoni created a sweet and smoky expression that was named Barrel-Finished Whiskey of the Year 2020 by Fred Minnick. 2,574 bottles were produced at 126.4 proof.

A mix of winter aromas on the nose opens up to a sweet and spicy palate, with sugary molasses and dark rum notes, and mature oak and booze-soaked red grapes on the rear palate. The finish is medium in length, with lingering rum and barrel tannins.