Size750mL Proof112.2 (56.1% ABV)
Four Gate Whiskey Company’s Release #8, Tennessee Foundation, is a 10-year-old Tennessee straight bourbon whiskey, presented without the company’s signature barrel finishing. It was made by blending five handpicked barrels of aged bourbon, and bottled at 112.2 proof. This is a very limited release, with only 812 bottles produced.
Notify me when this product is back in stock. 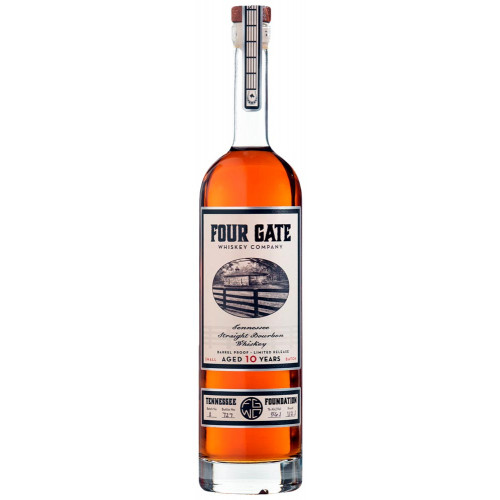 Four Gate Whiskey Company’s Release #8, Tennessee Foundation, is a 10-year-old unfinished Tennessee straight bourbon whiskey. This is the company’s third expression bottled without finishing, following two unfinished Kentucky straight bourbon whiskey batches, dubbed "Foundation," presented in late 2019 and in early 2020. For Batch #8, Straub and D’Antoni, selected and blended five barrels of 10-year-old Tennessee straight bourbon with a mash bill of 84% corn, 8% rye, and 8% malted barley, bottling it at 112.2 proof. With only 812 bottles produced, this is a very limited edition even for Four Gate.

Aromas of macadamia nuts, coffee, chocolate and rich leather on the nose are followed by peanuts, oak, earthy tobacco and hints of cinnamon on the palate. The medium-long finish has lingering nutty and earthy tones.