Size750mL Proof120.3 (60.15% ABV)
Outer Loop Orbit is Batch No. 2 from Four Gate Whiskey. Aged in orange curaçao barrels that a local distiller used to finish a batch of botanical gin, there are only 2,402 bottles of this unique bourbon blend, featuring a 5.5YO Kentucky Straight Bourbon and a 12YO High-Rye Kentucky Straight Bourbon out there.
Notify me when this product is back in stock. 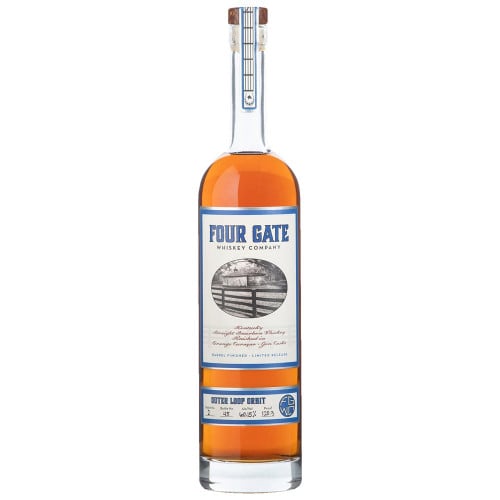 In 2018 Bill Straub and Bob D'Antoni, both whiskey enthusiasts, founded the Four Gate Whiskey Company in Kentucky and launched their mission to release extra small batches of unique combinations of whiskey and finish barrels. Specializing in sourced whiskey blends and partnering with Kelvin Cooperage, a family-owned barrel supplier founded in 1963 in Scotland and currently based in Louisville, the combinations of quality whiskey blends and used barrels they put together are truly ecclectic. From bourbon finished in cognac and dark rum casks to split stave casks, there is really no idea too wild for Four Gate and they make it work.

Their second release Outer Loop Orbit is no exception. After looking at and smelling casks together with William Hornaday at Kelvin Cooperage, Straub and D'Antoni picked what were originally orange curaçao barrels that a local distiller used to finish a batch of botanical gin. The curaçao's sticky sweetness and gin's sharpness immediately reminded them of the famous tangy drink the astronaut John Glenn drank in the 80s and they thought it would be beautifully complemented with a bourbon. A blend of 5.5YO Kentucky Straight Bourbon and a 12YO High-Rye Kentucky Straight Bourbon was put to rest for a month and the result was mind-blowing. Bottled at 120.3 proof, non-chill filtered and with only 2,402 bottles released, this bourbon has been described as out of this world. It owes its name to the Outer Loop street in Louisville where Kelvin Cooperage is located and to John Glenn who was the first American to orbit the Earth.

A ruddy amber hue. Citrus and pine greet you on the nose with black pepper spices in the background. The palate delivers tangy citrus with heavy cinnamon, pine needles and some nuttiness. The finish is medium long with citrus notes lingering in the aftertaste.