Learn more
Size750mL Proof80 (40% ABV) *Please note that the ABV of this bottle may vary
Forty Creek Double Barrel Reserve is an award-winning small-batch extra-aged whisky from one of the most lauded Canadian distilleries. This fine sipping whisky is a blend of aged rye, barley and corn whiskies, additionally aged for up to 2 years in once-used Bourbon barrels.
Notify me when this product is back in stock. 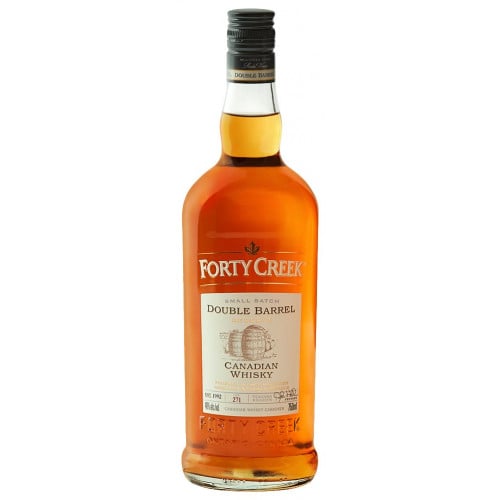 Forty Creek was established in 1992 by John Hall, who joined forces with master blender Bill Ashburn to carve out a bold new path for Canadian whisky. After eight years of planning, perfecting and producing, Canada had its first taste of Forty Creek Whisky in early 2000. Forty Creek’s reputation quickly grew, as the distillery continued to deliver ground-breaking innovations and a consistently smooth depth of flavor that pushed the boundaries expected of Canadian whisky. The distillery located in Grimsby, Ontario, Canada, was acquired by the Italian company Campari Group in March 2014.

Forty Creek’s efforts have been recognized and praised by esteemed whisky connoisseurs and critics on both the domestic and international whisky award stage. The distillery and its whiskies have received awards and recognition from the New York International Spirits Competition, Canadian Whisky Awards and Whisky Advocate Magazine, to name just a few. Today, Forty Creek and its team are one of the most awarded Canadian whisky makers of the last twenty years, with their accolades including titles such as Whisky Maker of the Decade, Canada Master Whisky Blender of the Year and Canada Whisky Distillery of the Year. Its Confederation Oak Reserve was conferred the prestigious title of the Whisky of the Decade by Canadian Whisky Awards.

Forty Creek Double Barrel Reserve is a small-batch extra-aged whisky. This expression is made by masterfully blending individual rye, barley and corn whiskies that were aged in a variety of barrels. The resulting blend is then aged for up to 2 years in once-used Bourbon barrels, creating a true celebration of the intricate and subtle flavors imparted by barrel aging. This fine sipping whisky has earned several awards, including two silver medals from Canadian Whisky Awards and a gold medal from the Beverage Tasting institute.

Vanilla notes on the nose are highlighted with toasted spice, pecan and walnuts. The palate is big and full-flavored, with luscious caramel, vanilla and rich spice. The finish is extra-long and mellow, with a touch of pepper.