Size375mL Proof110 (55% ABV)
Crafted from pure rye grains, this rye is the first barrel-aged whiskey distilled in Mason County, Kentucky in over 70 years.
Notify me when this product is back in stock. 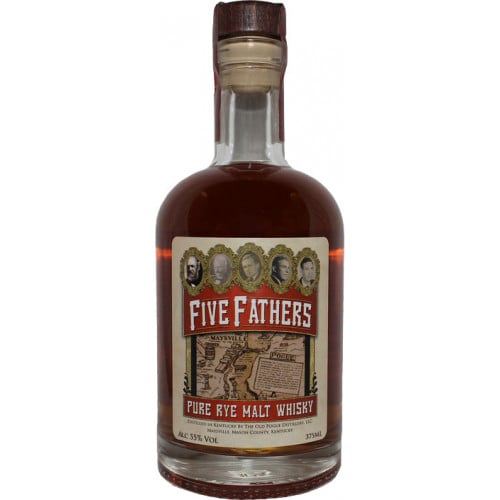 Just a decade after General Robert E. Lee surrendered to Ulysses S. Grant at Appomattox Courthouse, Henry Edgar Pogue (H.E. Pogue) purchased the Old Time Distillery from O.H.P Thomas. Located at the junction of the Ohio River and Limestone Creek — you may have lost a family member here if you ever forded a river playing Oregon Trail — the distillery was renamed after its new owner and became registered as Kentucky Registered Distillery No. 3. After his untimely death in 1890, H.E. Pogue was succeeded his son until 1918, when he too passed away during an accident at the distillery. Today, nearly 150 years after H.E. Pogue purchased Old Time distillery, the fourth and fifth generations of Pogues continue to shepherd the family legacy forward.

Five Fathers Pure Malt Rye Whiskey is crafted at the Old Pogue Distillery exclusively from malted rye grains. "Five Fathers is a tribute to our forefathers — all five of them" says Paul Pogue, the master distiller at Old Pogue Distillery. Once the grains arrive at the distillery, they are milled and mashed before being fermented and then distilled through a copper-pot still.

Following distillation, the rye is matured in 53-gallon, charred, American oak casks for just over one year. As a result, the rye has an aroma of black pepper, cloves, ginger and spicy rye that give way to thick notes of oak, caramel and vanilla on the palate. Bottled at a robust 110 proof, the rye whiskey is noticeably spicy but mellow.

Aroma of black pepper, cloves, ginger and spicy rye. Thick notes of oak, caramel and vanilla on the palate. Noticeably spicy but mellow.