Size750mL Proof66 (33% ABV)
Made from Canadian whisky, and aged in used American bourbon barrels, Fireball Whisky is infused with a signature burst of bold cinnamon flavor. 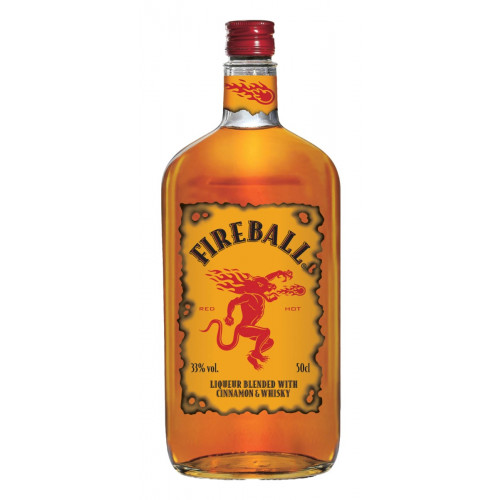 Fireball Cinnamon Whisky is one of the most iconic names of whisky in America and beyond. First introduced in the 1980s the brand evolved into the popularized drink that it is known today, originating from Canada. Until 2007 the drink was known as Sazerac’s Dr. McGillicuddy's Fireball Whisky.

Fireball above all, is known for its incredibly distinctive bold flavor of cinnamon spice. The whisky is naturally flavored with cinnamon, made from Canadian whisky, and aged in used American bourbon barrels. Fireball Whisky is bottled in Louisville, Kentucky. Enjoy Fireball as a shot, over ice, or in any signature spiced whisky cocktail.

Bold candied cinnamon spice notes bursting on the nose and palate. The finish is bold with heat.