Size750mL Proof117.47 (58.74% ABV)
Only 2,789 bottles of this limited release — which was finished in Pedro Ximenez and Fino sherry casks and bottled at cask strength of 117.47 proof — will ever be available.
Notify me when this product is back in stock. 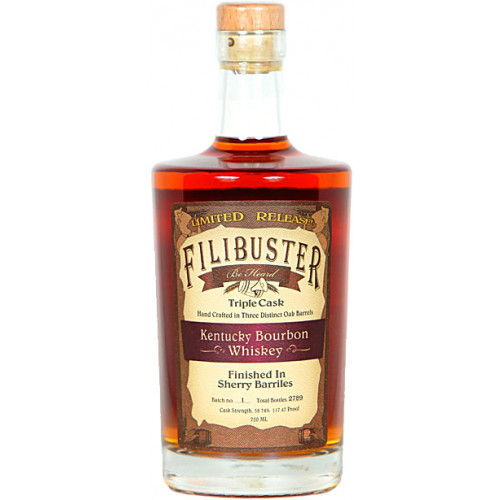 The filibuster is a powerful parliamentary procedure in the United States Senate that allows a Senator to speak indefinitely on any subject of his or her choosing in order to prevent a vote on legislation. In order to defeat a filibuster, Senate rules require that at least 60 senators vote to end debate and bring the legislation to a vote. The record for the longest filibuster is held by former Senator Strom Thurmond, who spoke for 24 hours and 18 minutes on the floor of the United States Senate. During the filibuster, cots were brought in from a nearby hotel for other Senators to rest while Thurmond discussed increasingly irrelevant and obscure topics, including his grandmother's biscuit recipe. (On September 24, 2013, Senator Ted Cruz spoke on the floor of the Senate for 21 hours and 19 minutes, the fourth longest speech in the history of the Senate).

"Filibuster Whiskey is so good," says Sid Dilawri, the brand's founder, "that you won't stop talking about it."

Filibuster Cask Strength Triple Cask Kentucky Bourbon Whiskey comes from just a few dozen barrels of five- to six-year-old bourbon that Sid Dilawri happened upon by good fortune. As soon as Sid tasted the barrels he knew they were destined for something special, and so he set out to import a few Pedro Ximenez & Fino Sherry barrels from Spain to use in finishing the bourbon. The barrels imported were just 40 liters in size — nicknamed “blood tubs” — and arrived in perfect condition, still wet.

Filibuster Limited Release Triple Cask Kentucky Bourbon Whiskey was further matured for 60-90 days in Pedro Ximenez (80 percent) and Fino Sherry (20 percent) barrels for additional finishing, before being bottled at cask strength (117.47 proof). As a result, the bourbon has a deep, heady aroma of brown sugar, dried plums and wood smoke. The palate is slightly sweet, with notes of crushed grapes and cacao nibs, and leads to a complex finish accented by old leather and bold tannins.

Only 2,789 bottles of this limited release will ever be available — pick up a bottle today!

Deep, heady aroma of brown sugar, dried plums and wood smoke. Palate is slightly sweet, with notes of crushed grapes and cacao nibs, and leads to a complex finish accented by old leather and bold tannins.