Size750mL Proof90 (45% ABV)
Filibuster Boondoggler Whiskey borrows from both bourbon and rye styles to create something unique. Aging in 5 different casks including new oak and French sherry results in an incredibly complex aroma that belies its easy drinkability.
Notify me when this product is back in stock. 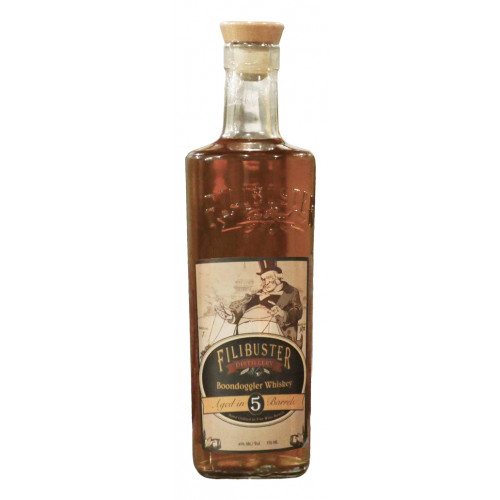 The filibuster is a powerful parliamentary procedure in the United States Senate that allows a Senator to speak indefinitely on any subject of his or her choosing in order to prevent a vote on legislation. Filibuster Distillery was founded in Washington D.C., near Capitol Hill and the name was chosen as a tribute to the freedom of expression that is a part of what makes America great.

They are extremely proud of their lineup, which is built on the purest limestone-filtered water ― according to some, Shenandoah limestone enriches the water with even more desirable minerals than can be found in much-lauded limestone-filtered Kentucky water. Only the finest quality grains are used in this bio-sustainable operation and are converted into poultry feed after use. What really sets them apart, is their proprietary Dual Cask finishing program, where the traditional charred, new American oak barrels are joined by different wine casks. "Filibuster Whiskey is so good," says Sid Dilawri, the brand's founder, "that you won't stop talking about it."

They took a bold and unconventional approach with Filibuster Boondoggler Whiskey. While not a traditional bourbon nor rye, it borrows from both styles to create something unique. Built on a mash bill of corn, barley, and rye, it's been aged in a staggering 5 different barrels including new American oak, red and white wine French oak, as well as Fino and Pedro Ximenez sherry casks. This results in an incredibly complex nose with dried fruit and cherries, as well as caramel, vanilla, and toast. The taste is surprisingly simple with prominent sweetness as well as rye, spice, cereal, and chocolate notes. It finishes fast but well-balanced and slightly warming.