We're showing you items that ship to NH.

This product is available in: CA, DC, MN, TX Unfortunately, we can't ship to PO Boxes and APO addresses.

Size750mL Proof90.8 Proof (45.4% ABV)
Made from estate-grown agave that are nearly a decade old, Fidencio mezcals are crafted by a fourth-generation mezcalaro.
Notify me when this product is back in stock.

This product is available in: CA, DC, MN, TX Unfortunately, we can't ship to PO Boxes and APO addresses. 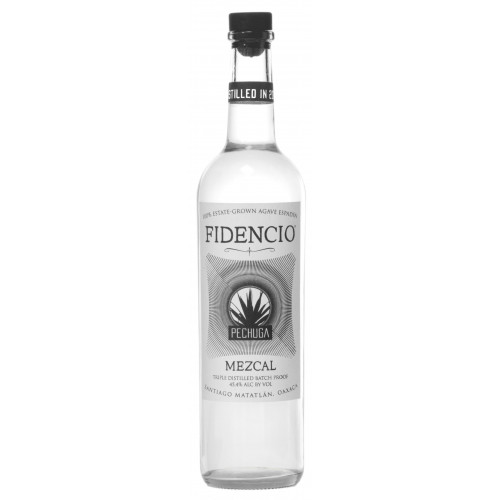 In order to craft Fidencio Fidencio Pechuga mezcal, the split piñas are roasted underground over a fire made from the embers of encino (or black oak) for five days, giving the mezcal its signature, smoky flavor. This process, says Enrique, allows him to "produce a mezcal that is a pure expression of espadín, without the influence of smoke that is typically found in other mezcals." Once the piñas have been roasted, they are crushed under a tahona (or stone wheel) made from rose quartz and the resulting pulp is then fermented using wild yeast for six to twelve days, depending on the weather.

Fidencio Pechuga is made by distilling Fidencio Clásico mezcal a third time together with a unique recipe of fruits, including apples, bananas, pineapples and guava (all of the fruit are from the mountains of Oaxaca). In addition, a whole chicken breast, which has been skinned and washed to remove any remaining fats, is hung from the cap of the still and said to soften the intensity and round out the flavors of the mezcal.

As a result, the mezcal has soft notes of spices, cinnamon and earthy minerals that are complemented by bold notes of tropical fruits and sweet vanilla. The mezcal earned a score of 90 points from Wine Enthusiast.

Fidencio Pechuga Mezcal has soft notes of spices, cinnamon and earthy minerals that are complemented by bold notes of tropical fruits and sweet vanilla.