Size750mL Proof58.7% ABV
This cask-strength edition of an already fantastic, award winning whiskey, is drawn from a single barrel and bottled at cask strength.
Notify me when this product is back in stock. 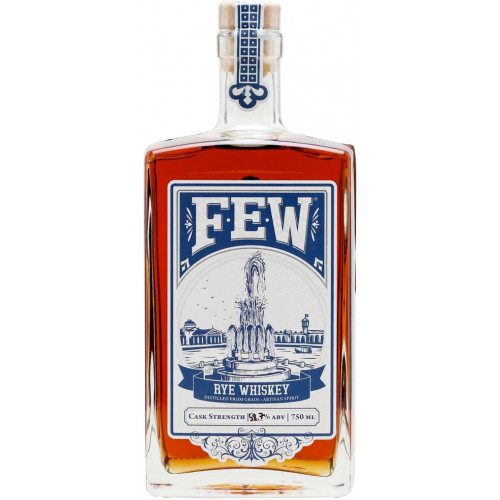 FEW Spirits is a symbol of ingenuity and enlightenment. It was founded in 2011 in Evanston IL —the birthplace of the Temperance movement— by former patent attorney, Paul Hletko, who dismantled over a century of archaic Prohibition laws to establish the first distillery within city limits. The facade of the distillery provocates the clandestine air of a dry era, making more of a statement of its peculiarity rather than masking it, located in a former repair shop for ""cars of unknown ownership.”

Former beer brewing hobbyist, Hletko’s grandfather also owned a brewery in the Czech Republic, which he lost when Hitler invaded. He advocates a grain to glass philosophy, “We're able to source our corn, wheat, and rye regionally, much of it from farm cooperatives.” FEW gets its corn from a farmers' co-op in Indiana, and their barley and rye from farmers in Wisconsin. Being in the “middle of the country’s bread basket,” Illinois is actually a top producer of corn in the US. Having locally sourced grains allows them to produce smaller quantities of high quality spirits without compromising the integrity of the flavor.

This cask-strength edition of an already fantastic award winning whiskey is drawn from a single barrel and bottled at cask strength. The mash bill is 70% rye and 20% corn, and 10% two row malt. Every step of the distillation process takes place onsite. After the grain is mashed and fermented, the wash is distilled through a 1,500-liter Kothe copper-pot still. The rye is aged in custom-made oak barrels from Minnesota. "The cooper I eventually chose to make our barrels won 24 out of 25 categories at a spirits competition I visited," Hletko says. The #3 char on the barrels gives FEW rye hints of allspice and peppercorn, which are followed by notes of dark caramel and cinnamon. After aging the rye, Hletko and his team of distillers fill and label each bottle by hand.

FEW rye has won several awards: the 2013 Craft Whiskey of the Year by Whisky Advocate, a gold medal at the World Whiskey Awards, a gold medal from the Beverage Tasting Institute, and another gold medal at the International Whiskey Competition. FEW Rye has expressive notes of roasted pineapples, citrus and smoke on the nose. The palate opens with notes of figs, tobacco, and slight hints of caramel, layered over a chocolate, peppery finish.

FEW Rye has expressive notes of roasted pineapples, citrus and smoke on the nose. The palate opens with notes of figs, tobacco, and slight hints of caramel, layered over a chocolate, peppery finish.