Size750mL Proof75 (37.5% ABV)
Wenneker Elderflower dry gin is an award-winning classic gin with delicate taste of elderflower. It is made in small batches using 6 distillates – juniper berries, lime-tree blossom, lemon, orange, coriander and elderflower.
Notify me when this product is back in stock. 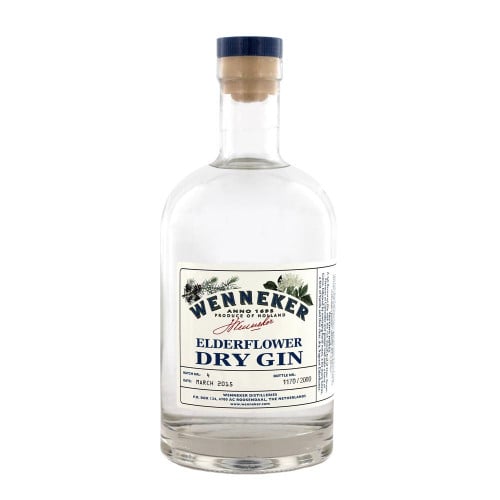 Wenneker Distilleries is a family owned business, and one of the oldest Dutch spirits companies. Its story goes back to 1693, when Hendrick Steeman was granted a license for installing two pot stills for distilling brandy. In 1812 the distillery was bought by Joannes Wenneker. His great-grandson Franciscus Wenneker sold the company to Johannes Cornelis van der Tuijn in 1903 due to a lack of successors, and today Wenneker Distilleries is run by the fourth generation of Van der Tuijns. The distillery has built up great local and international reputation for the high quality of its genever (Dutch gin), gin and liqueurs. In 1967, Wenneker moved from Schiedam to a former KvW tobacco factory in Roosendaal so it could expand its capacities to meet the growing demand for its spirits. Wenneker also grew through takeovers, and acquired a number of well-known distilleries and the wine merchant Dirk Struys & Zoon over the years. As the company’s portfolio grew, it became hard to manage all the different brands in a very competitive market, so Wenneker decided to sell most of the acquired brands and primarily focus on its own brand.

Sourcing best ingredients from all over the world, Wenneker makes genever, gin, bourbon, spiced whiskey, rum and spiced rum, and over 40 different liqueurs. Its products are available in over 50 countries worldwide. While building on the tradition and over three centuries of expertise, Wenneker has evolved with consumers and their palates. The company for example still uses a 17th century recipe as a basis for its liqueurs, but does not shy away from introducing modern, bold flavors, such as red beetroot or carrot.

The nose opens up with classic juniper and coriander, with a touch of zesty citrus and a flourish of elderflower. The palate is full-flavored, with the rich mouthfeel of elderflower, and notes of coriander and juniper, bursting citrus, followed by floral notes, a hint of vanilla and dry, fragrant elderflower.