Size750mL Proof93 (46.5% ABV)
FEW American Straight Whiskey is made by blending FEW Spirits’ award-winning bourbon and rye whiskeys, and its experimental cherrywood-smoked malt whiskey. It comes with no age statement, and is bottled at 46.5% ABV. This expression won the "Best American Blended" title at the 2020 World Whiskies Awards.
Notify me when this product is back in stock. 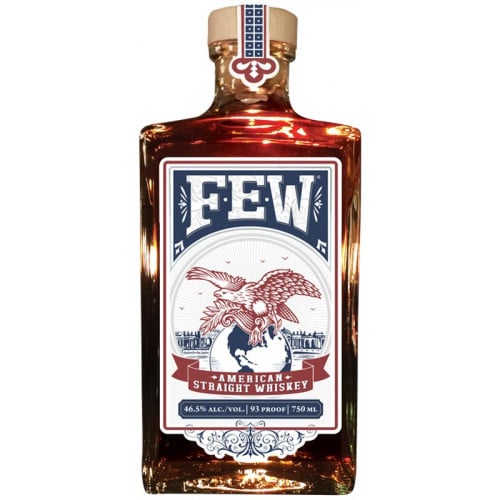 FEW Spirits, based in the growing Chicago suburb of Evanston, Illinois, is an American grain-to-glass distillery founded in 2011. The distillery produces a range of award-winning whiskeys and gins, using ingredients sourced as locally as possible. The first inspiration behind this craft distillery are the pre-Prohibition times, or the golden age of spirits, and the 1893 World’s Fair, which took place in Chicago. The second inspiration comes from the Prohibition itself. When trying to come up with a name and looking for a word that could imply something rare, small, the FEW Spirits founder and distiller Paul Hletko realized FEW are also the initials of Frances Elizabeth Willard, a prominent late-19th century figure in the Women’s Christian Temperance Union, whose activities culminated in the Prohibition that started in 1920. Even though the Prohibition was repealed in 1933, Evanston remained a dry community several decades later, and you could not buy liquor there until 1970s. Hletko had his work cut out for him, and had to push for changes in the local law before he could start. FEW Spirits was the first distillery to open in Evanston in modern times, and in less than a decade of operation, its American whiskeys with a bold Chicago-style twist and other innovative products have already won a long line of awards and acclaims.

The distillery produces its handcrafted, small-batch spirits in two copper pot stills, using the first still to produce the whiskey and strip low wines for gin production, and a separate still for gin production to prevent the gin flavors from mixing with their whiskey.

FEW American Straight Whiskey is made by blending hand-selected FEW Bourbon and FEW Rye whiskeys that create the backbone of the expression, and adding the distillery’s rich yet balanced experimental cherrywood-smoked malt whiskey. This whiskey comes with no age statement, and is bottled at 46.5% ABV.

The nose reveals an approachable whiskey, with notes of graham cracker/honey on top and a savory rye spice below. The palate has some tart cherry, and a hint of smoke rounding out the texture. The finish is subtle with white pepper and honey.