Size750mL Proof101 (50.5% ABV)
All Secrets Known is a limited-release bourbon made by the Chicago-based FEW Spirits in collaboration with the iconic Seattle band Alice in Chains. The expression, named after a 2009 AIC song, is made from fully matured high-rye bourbon finished for six months in ex-tequila barrels.
Notify me when this product is back in stock. 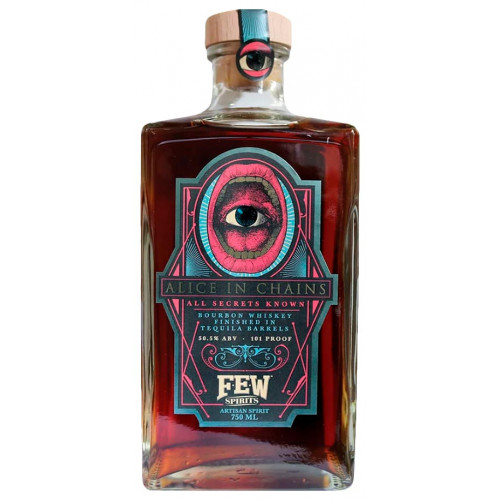 FEW Spirits, based in the growing Chicago suburb of Evanston, Illinois, is an American grain-to-glass distillery founded in 2011. The distillery produces a range of award-winning whiskeys and gins, using ingredients sourced as locally as possible. The first inspiration behind this craft distillery are the pre-Prohibition times, or the golden age of spirits, and the 1893 World’s Fair, which took place in Chicago. The second inspiration comes from the Prohibition itself. When trying to come up with a name and looking for a word that could imply something rare, small, the FEW Spirits founder and distiller Paul Hletko realized FEW are also the initials of Frances Elizabeth Willard, a prominent late-19th century figure in the Women’s Christian Temperance Union, whose activities culminated in the Prohibition that started in 1920. Even though the Prohibition was repealed in 1933, Evanston remained a dry community several decades later, and you could not buy liquor there until 1970s. Hletko had his work cut out for him, and had to push for changes in the local law before he could start.

FEW Spirits was the first distillery to open in Evanston in modern times, and in less than a decade of operation, its American whiskeys with a bold Chicago-style twist and other innovative products have already won a long line of awards and acclaims. The distillery produces its handcrafted, small-batch spirits in two copper pot stills, using the first still to produce the whiskey and strip low wines for gin production, and a separate still for gin production to prevent the gin flavors from mixing with their whiskey.

All Secrets Known is a limited-release bourbon made in collaboration with the iconic Seattle band Alice in Chains, and named after a 2009 AIC song. It is made from fully matured high-rye bourbon, finished for six months in ex-Tequila Reposado barrels.

Notes of vanilla and some spice from the rye on the nose announce a spicy palate, with notes of vanilla, menthol and cinnamon. The finish is long, with closing earthy agave notes.