Size750mL Proof94 (47% ABV)
A true terroir northern Minnesota whiskey, this expression is crafted with estate-grown grain. The mash bill consists of 60% Minnesota 13 heirloom corn, 30% AC Hazlet winter rye, and 10% malt barley. Aged in Minnesota-made oak barrels, 600 cases of the 94-proof whiskey were produced.
Notify me when this product is back in stock. 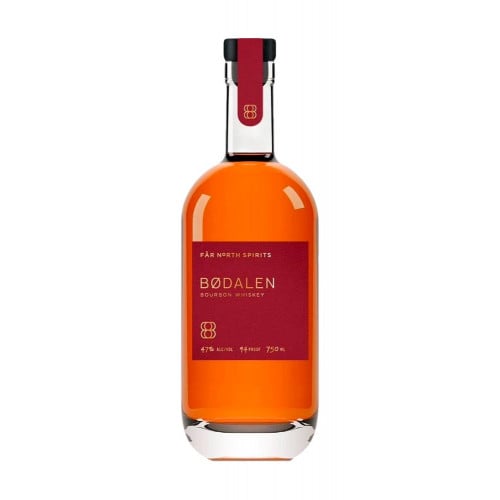 Far North Spirits is located on Swanson Farms, a working family farm set on 1,500 acres of Red River Valley jet-black soil in the northwest corner of Minnesota. Great Grandpa Gustav arrived in Minnesota back in 1917, and the land has been farmed by Swansons ever since — by his son Albert and Albert's son Charles. Now Michael, the fourth-generation farmer in the family, plans to make Far North Spirits a large part of the farm's next 100 years. "Farming and distilling," Michael says, "are a marriage made in Minnesota. With its incredibly rich soil and farmer's pride in quality grains, Minnesota is certain to become a craft spirits destination."

Bødalen takes its name from a picturesque glacial valley in Norway. It's a single-estate bourbon whiskey that is produced with estate-grown grain varieties. The mash bill consists of 60% non-GMO Minnesota 13 heirloom corn, 30% AC Hazlet winter rye, and 10% malt barley. It's this focus on varietals that stems from the estate's wine making operation that makes this expression a true terroir northern Minnesota whiskey. The whiskey spent 18 months in Minnesota-made oak barrels before being bottled at 94 proof. 600 cases of Bødalen were produced.

Get your bottle of this award-winning terroir bourbon today!

Toffee, orange zest, and sweet corn greet the nose. Peppery spice, vegetal notes, and wood are on the palate that culminates in a long and rich finish with dark chocolate and caramel.